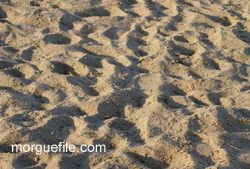 LONDON (AP)—The world's deserts are under threat as never before, with global warming making lack of water an even bigger problem for the parched regions, a U.N. report released Monday said.

The first comprehensive look at deserts around the world said these areas, their wildlife and, most of all, their scarce water supplies are facing dramatic changes.

"Deserts are the last great wildernesses and the Cinderellas of the conservation world—out of sight, out of mind,'' said Nick Nuttall, a spokesman for the United Nations Environment Program. "Everybody cares about the mountains. Everybody is worried about the oceans. ... But nobody has really thought about the deserts before. They need help.''

Desert areas make up almost one quarter of the Earth's surface, or 13 million square miles, and are home to some 500 million people, more than previously thought.

Most of the 12 desert regions whose future climate was studied face a drier future, the report said. Experts predicted that rainfall would fall by as much as 20 percent by the end of the century due to human-induced climate change.

Compounding the threat is the melting of glaciers. A large fraction of water used for agricultural and domestic purposes in deserts in the southwestern United States, Central Asia and South America come from rivers that originate in glaciers and snow-covered mountains, the report said.

The glaciers on the Tibetan plateau, for example, may decline by as much as 80 percent by the end of the century, according to the Intergovernmental Panel on Climate Change, a group of scientists advising the United Nations.

"When the glaciers disappear, you are in serious trouble,'' said Andrew Warren, one of the report's authors and a professor of geography at University College London.

The report warned that renewable water supplies fed to deserts by large rivers are also in danger because of climate change and booming growth. It cited the Rio Grande and Colorado rivers in North America, the Tigris and Euphrates in southwestern Asia and the Amu Darya and Indus rivers in Central Asia as being under threat.

The report's authors urge more comprehensive water policies to manage the world's limited supplies more effectively. The report warned that Chad, Iraq, Niger and Syria, for example, could experience scarcity in water supplies by 2050 if nothing is done.

Warren also said urgent action was need to protect wildlife in deserts, noting that increasing wealth in Arab lands has led to convoys of hunters sweeping through the arid landscapes of Arabia, Kazakhstan and Sudan in search of prey, "shooting what they can or running it down in jeeps.''

Several species of gazelle, Barbary sheep and a type of bird called the Houbara are among the species considered under threat, Warren said.