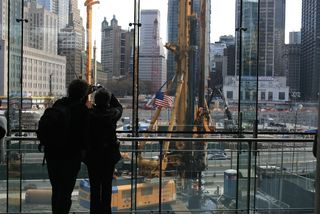 A couple looks on at the rebuilding at Ground Zero in this undated photo.
(Image: © Christopher Penler / Shutterstock.com)

On the morning of Sept. 11, 2001, Debra Stang was running late and trying to slip into work unnoticed. But when she arrived at the Alzheimer's facility in Overland Park, Kan., where she worked as an administrations assistant, no one seemed to notice her tardiness. They were all glued to the TV news.

What they were watching was a now-familiar litany: planes crashing into landmarks and empty fields, skyscrapers collapsing, thousands dead. The difference for Stang, a social worker and freelance writer, was that she was getting the news of 9/11 alongside dozens of residents with Alzheimer's and other dementias, many of whom found the attacks even more disorienting than they seemed to Stang herself.

One woman, seeing replays of the planes hitting the towers again and again, began to cry, Stang told LiveScience.

"'Why don't they stop it?' she asked," Stang said. "'Why do they keep doing it and doing it?' She didn't understand that she was seeing the same images over and over again."

Another woman, a Holocaust survivor, began to panic, Stang said, believing that a country at war was a country where people would be rounded up and sent to death camps.

For the most part, experts say, the psychological trauma of 9/11 faded with time, especially for those who were not personally affected by the attacks. But in the short term, age mattered in how you took in the events. Young children reacted with everything from fear to equanimity, depending on how deeply they understood what was going on. Many young adults saw 9/11 as a life-defining moment. And some elderly witnesses, like the Holocaust survivor, had past experience that colored their interpretation of that day.

"We had these long talks about how this was a different kind of war and she was safe," Stang said of that patient. "It was heartbreaking."

Older and in control

The patients at the facility where Stang worked were struggling to understand the attacks through a fog of cognitive impairment. Some simply couldn't comprehend what was going on, like one woman living at the facility who thought the flames blackening the twin towers were "pretty." Others understood, but forgot the attacks had happened within a few days. Each new newspaper article or TV replay re-triggered their anxiety and fear, because they believed they were seeing the attacks happen for the first time. [Read: Do You Really Remember Where You Were on 9/11?]

For older adults without cognitive disabilities, the attacks seemed to lead to a decline in feelings of control, according to a study published in the Journal of Gerontology in 2003. Volunteers already involved in a long-term health study answered questionnaires about their emotions, stress and health six months before and after 9/11.

"It was the lack of predictability and a sense of control over things that was most problematic in people's minds," said study researcher Fredric Wolinsky, a professor of health management and policy at the University of Iowa.

The effect was strongest in those people who most closely resembled the workers in the World Trade Center and the Pentagon in their education and income levels, Wolinsky found, possibly because the attacks shook that group's sense of security.

Older adults generally report feeling more in control of their lives than younger adults in the first place, Wolinsky said, so they have more to lose when things get chaotic. But by the end of the six-month follow-up period, people's feelings of control were returning to normal, he said.

A gradual return to normalcy might be expected for people who have lived through events such as the Kennedy assassination and the bombing of Pearl Harbor. But what about younger generations who'd never seen a national tragedy on this scale? [Gallery: 9/11 Remembered in Space Photos]

Shortly after 9/11, the media predicted that the attacks would forever change the high-school and college students who watched the twin towers crumble from classrooms and lecture halls. In November 2001, Newsweek magazine dubbed these young adults "Generation 9/11."

And indeed, young people did respond to 9/11 with volunteerism and community service, said Pat Somers, a professor of higher education at the University of Texas at Austin who studied UT students shortly after the attacks. Some changed their majors to "helping" fields, Somers told LiveScience, while others ended relationships or decided to get married and have children. Other college students, including Erin Callaway, a freshman at the University of Maryland on 9/11, began to focus their education on security-related subjects.

"I actually started taking a graduate course in homeland security, [and] I ended up working for a company that specialized in air traffic control software," Callaway, now a technical writer who blogs at shophappens.com, told LiveScience. "It impacted me professionally, absolutely."

But on the whole, 9/11 has not caused a major shift in young people's attitudes, said Jean Twenge, a psychologist at San Diego State University and author of "Generation Me: Why Today's Young Americans Are More Confident, Assertive, Entitled ­— And More Miserable Than Ever Before" (Free Press, 2007).

"It doesn't seem to be a lasting effect," Twenge told LiveScience. "For the overall generational changein, say, concern for others, there's just not much there."

While Somers said that it may take time for the 9/11 generation to come into its own — after all, Tom Brokaw didn't label the World War II generation the "Greatest Generation" until 1998 — Twenge was more skeptical.

"Generations are about culture, not about events," Twenge said. "It's socialization, parents, the media and teachers. … One dramatic event doesn't shift things like family structure, the general things you're taught about how to live your life and what's important."

The youngest of the 9/11 witnesses are now themselves in high school and college. Like their older counterparts, people who were children on Sept. 11, 2001, experienced a spike in anxiety and worry. But as long as the child didn't lose anyone in the attacks, these effects were short-lived, said Robin Gurwitch, a psychologist and program coordinator at the National Center for School Crisis and Bereavement at Cincinnati Children's Hospital Medical Center. [10 Facts Every Parent Should Know About Their Teen's Brain]

"Fifteen months later, for example, many kids' levels of distress were back down within normal limits," Gurwitch told LiveScience. Children whose parents were supportive and encouraging during the disaster were more likely to do better later, she said.

For some young children, 9/11 caused little distress. Margery Hirschey, a jewelry designer in Boulder, Colo., kept the television volume down on the morning of the attacks, hoping not to frighten her 9- and 12-year-old daughters. Both seemed to view the attacks as a faraway event, Hirschey said; they'd been far more alarmed at the close-to-home Columbine school shooting that had occurred in Littleton, Colo., In 1999.

"I'm sure it was much harder for the kids on the East Coast," Hirschey told LiveScience. "In Colorado, we're in the middle of nowhere and it kind of felt like we were safe."

In Ontario, relatively close to the destruction in the Northeastern United States, 13-year-old Ian Sandusky had the opposite reaction to the attacks.

"The confusion — the endless rumors mingling with facts that no one could keep straight — that was a sense of disorder I hope to never feel again," Sandusky, now an author in Toronto, wrote in an email to LiveScience.

Although studies suggest that, for most people, such feelings of disorder and psychological pain eventually faded, subjective memories of Sept. 11 invariably reveal the importance people continue to attach to the attacks.

"In my regard of time, there are two eras — before 9/11, and after 9/11," Sandusky wrote, adding, "In retrospect, 9/11 kind of serves as the milepost between my childhood and the entrance to my adult life."

Correction: This article was updated on Sept. 12 to correct the spelling of Debra Stang's name.