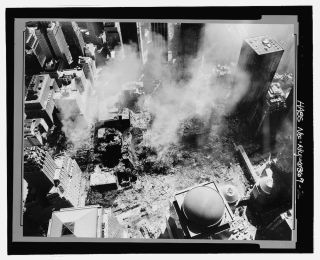 How do you talk to children about the terrorist attacks of Sept. 11, 2001? The American Psychological Association (APA) and kids' cable channel Nickelodeon are partnering up to answer that question with a news special on the attacks geared toward kids who may be too young to remember that day.

The special, "What Happened? The Story of September 11, 2001," will air Thurs., Sept. 1 at 9 p.m. ET/PT. Too accompany the half-hour show, the APA and psychologist Robin Gurwitch created a discussion guide to help parents and teachers talk through the events. (The guide is available at the APA's website, www.apa.org.)

The APA spoke with Gurwitch, a program coordinator at the National Center for School Crisis and Bereavement at Cincinnati Children's Hospital Medical Center, about how children respond to trauma and how adults can help them cope on the anniversary of 9/11 .

Q: How do children react to a traumatic event? Is there a typical reaction and is it different from that of adults?

Gurwitch: Typically, most children’s reactions fall into four categories: emotional (feelings), cognitive (thoughts), behavioral (actions), and physiological (how our bodies react). While adults may also have reactions in these same categories, how they play out will likely be different.

For example, both may become more irritable. Young children are more likely to have temper tantrums while older children may have more oppositional behaviors. In other words, simple requests may be met with “no” or it may take them a while to follow your requests. Irritability in older teens and adults may manifest in more short-tempered reactions, with little things being more upsetting than usual. For example, a 4-year-old has a mind of her own when she gets dressed for preschool. However, when feeling more distressed, she may become more upset when her choices are not immediately available, breaking into tears when she can’t find her favorite skirt. Although a 16-year-old usually picks up his younger sister from her dance class, when feeling more distressed , he argues with his mother that this is a big inconvenience now — he picks up his sister, but with a negative attitude.

Q: What do we know about how children reacted to 9/11?

Gurwitch: Children across the country watched the events unfold through media coverage of the attacks in the days and weeks afterward. Immediately following the attacks, both parents and children commonly reported anxiety and worry. The good news is that for children who were not directly affected by the attacks — i.e., did not witness them in person or lose a loved one — the emotional fallout  was fairly transient. However, for children living in the New York City area, researchers found an increase in problems such as post-traumatic stress disorder and anxiety. Children had questions and concerns about future attacks.

Q: Will the increased media focus on the attacks due to the 10th anniversary create anxiety for some children?

Gurwitch: It’s possible some children and young adults (those who were children at the time) may have anxiety related to the increased media attention to the anniversary. This may be particularly true of those children who had direct experience with the events (e.g., were physically present or had family members killed or injured). Children whose parents or other family members have been involved in the military response to the attacks may also express more concerns. It will be important for parents and other caregivers to be available to discuss coverage with them (and even watch it with them), listening for concerns and answering any questions honestly and age-appropriately.

Q: For those children who were very young when the attacks occurred and will be learning about them through the anniversary coverage, will the experience and the potential for anxiety be just as "real"? Do we know?

Gurwitch: Children learning about the attacks for the first time during the anniversary coverage are likely to have questions. Very young children may not understand that what they are watching is a replay; therefore, watching the horrors being repeated may be anxiety-producing. Older children may have some anxiety as they strive to understand what they are seeing and why the attacks took place. They may "fill in" what they do not understand and this can create anxieties.

This year’s coverage is also likely to feature the war on terrorism and the death of Osama bin Laden . Children may also have concerns and questions about these topics. Furthermore, as they watch their parents’ or caregivers’ reactions to the coverage, children will likely take cues from them. It will be important for parents and other caregivers to monitor exposure and discuss what is seen, including the ongoing military action in Iraq and Afghanistan. We recommend that very young children (under 6 years of age) watch little to none of the media coverage.

Q: How should parents and other caregivers help those children who have an emotional reaction to the anniversary coverage?

Gurwitch: For children who have an emotional reaction to the anniversary coverage, the most important thing parents and other caregivers can do is to be available. This means listening to your child’s concerns and honestly and age-appropriately answering any questions.

It will be important to help children understand actions that are being taken to reduce the risk of such events ever happening again. In other words, you can’t say "never again"— there may be a possibility , but the probability of your children’s being directly affected is very low. This is a good time for families to discuss safety and disaster plans to reinforce a sense of security.

Finally, if parents notice an emotional reaction, reduce time spent watching and increase time spent talking. Monitor your child’s reactions and if they do not lessen or are combined with changes in daily behaviors, consider contacting a mental health professional as these reactions may be a sign that the child is having worries about other things that may be affecting his or her overall emotional well-being.

Q: Should parents and other caregivers try to limit children’s exposure to media coverage of the anniversary?

Gurwitch: Much of the answer to this depends on the age of the child. Very young children should be shielded from coverage as they may not understand it and, therefore, it can be unsettling. For young school-age children, viewing coverage should not be constant. Protecting young children from graphic images will be important. Most important is the connection children have with their parents and other caregivers as they watch coverage. Having an adult there to talk to about what they are seeing and how they are feeling about the coverage is the key. For pre-teens and teenagers, ask their thoughts and opinions. Get a sense of what they understand — again, watching as a family is the answer rather than trying to determine quantity of time spent viewing coverage.

Q: How can a parent or caregiver know that a child is struggling with worry he or she doesn’t necessarily express? Is there a specific set of symptoms that suggest that it’s time to seek professional assistance for a child?

Gurwitch: Children express their worries and anxieties  both verbally and through behavior.  Other than talk of harming themselves or focusing on death, there is no specific set of symptoms that suggest a child is experiencing emotional difficulties. However, parents and other caregivers should be aware of changes in daily behaviors. Among these are changes in mood and/or mood swings, more withdrawn or clingy behaviors, changes in sleeping or eating habits, changes in school performance and peer relationships, and changes in attention, concentration, and ability to “get things done” at home or at school. The bottom line is, it is always OK to ask for help and guidance. If a parent or caregiver is worried, ask for help. By asking, caring adults can address their concerns and feel confident that their children are having their needs met.

This Q&A was provided by the American Psychological Association.