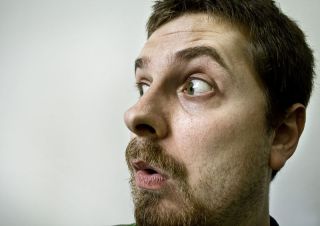 A disorder of the inner ear called superior canal dehiscence syndrome causes every sound within the body to be amplified, even the movement of one's eyeballs, all the time.
(Image: © dundanim / Shutterstock)

It sounds like something out of an Edgar Allen Poe tale of horror. A man becomes agitated by strange sounds only to find that they are emanating from inside his own body—his heart, his pulse, the very movement of his eyes in their sockets. Yet superior canal dehiscence syndrome (SCDS) is a very real affliction caused by a small hole in the bone covering part of the inner ear. Such a breach results in distortion of hearing and, often, impaired balance.

The human ear consists of three parts. The outer ear includes the ear lobe and external auditory canal, which funnels sound waves toward the eardrum (or tympanic membrane) allowing it to vibrate. The middle ear converts sound waves that vibrate the eardrum into mechanical vibrations for the cochlea, the hearing part of the inner ear. This area, however, also includes of a system of three fluid-filled semicircular canals in each ear—superior, posterior and horizontal—responsible for giving the brain information about angular motion of the head. SCDS can occur when some part of the bone protecting the superior semicircular canal is missing.

Whereas it is difficult to know exactly how prevalent SCDS is, several reported cases define how it impacts the lives of those suffering from the disorder. Stephen Mabbutt, a 57-year-old Englishman who suffered from SCDS for six years, described "hearing his eyes scratching like sandpaper every time they moved in their sockets." He returned to work earlier this month after successful surgery to plug a pin-size hole in the bone covering the semicircular superior canal in one of his ears. Toby Spencer, a 41-year-old IT professional from Skowhegan, Maine, described similar symptoms as Mabbutt as well as the feeling that loud noises made him feel as though he was losing his balance. Spencer had surgery in April to correct the problem. [Read more about inner ear ailments and remedies: "Regaining Balance with Bionic Ears"]

Musician Adrian McLeish suffered from the disorder for more than two decades, even having to give up his livelihood playing the French horn, before in 2008 seeing Lloyd Minor, provost and senior vice president for academic affairs at Johns Hopkins University in Baltimore. McLeish sought out Minor, a professor of otolaryngology—head and neck surgery—because he is the lead author on the study in 1998 providing the first description of SCDS in Archives of Otolaryngology—Head & Neck Surgery.

McLeish described (video) not only hearing a buzzing, distorted version of his own voice but also being able to feel the vibrations of the sound whenever he spoke. Essentially, the missing piece of bone in McLeish's left ear was allowing the superior semicircular canal to respond to sound and pressure in abnormal ways. It was enough for the canal to act as an amplifier for every sound in his body. McLeish's horror story came to a happy ending soon after meeting with Minor, who corrected the problem and allowed the musician to resume his career.

Scientific American spoke with Minor about the nature of SCDS, the toll it takes on those who suffer from it and why it's best to plug (rather than cover up) such an opening.

[An edited transcript of the interview follows.]

What is superior canal dehiscence syndrome (SCDS)? Superior canal dehiscence syndrome is a disorder caused by an opening in the bone that should cover the inner ear's top balance canal (called the superior semicircular canal). The inner ear consists of a bony labyrinth that has two parts: the cochlea, which enables us to hear, and the vestibular labyrinth, which enables us to keep our balance. Located within the labyrinth are three semicircular canals that act as angular accelerometers for the head. When these are working properly, they allow us to maintain a steady gaze and keep images stable on our retinas even when our heads are moving.

The inner ear is a closed system surrounded and protected by the petrous portion of the temporal bone. In superior canal dehiscence, a portion of the bone covering the superior balance canal is missing. Without this bone, the membranous canal is exposed to the overlying dura mater membrane of the brain's temporal lobe. Mechanical stimuli such as sound and pressure can then cause motion of the fluid in the membranous canal resulting in abnormal neural activity from the sensory receptor cells associated with the canal. This can lead to hearing loss, abnormal eye movements and a sudden sensation of movement (vertigo) as a result of loud noises or pressure, such as coughing or sneezing.

How were you able to first identify SCDS? It was a study of the eye movements. The eye movements of this disorder, which is evoked by sound and pressure, are quite distinctive. Because the superior semicircular canal is affected, the eye movement is typically vertical-torsional, meaning the eye closest to the affected ear will twitch in a direction up and away from that ear (toward the middle of the face) in response to loud noises or by stimuli that change middle ear or intracranial pressure (such as coughing, sneezing or straining).

Can someone be born with SCDS or is this something that afflicts people only later in life? Our hypothesis is that about 1 or 2 percent of the population fails to develop a normal thickness of bone overlying the superior canal. If you have a normal thickness of bone, which is about 0.6 or 0.7 millimeter covering the superior canal, that's very unlikely to ever erode. If you started out with 0.1 or 0.2 millimeter of bone, yes, that can be eroded over time for a number of reasons: pressure from the temporal lobe sitting on top of it, changes in intracranial pressure or maybe by trauma. The median age of onset is in the early 40s, and it does tend to affect men and women equally. But you rarely see it in kids. That suggests that the opening probably doesn't develop until later in life.

Does SCDS worsen over time if it is not treated? In many cases, it will stay at a certain level, although it's hard to predict. That very first patient I identified with this disorder back in 1995—whose eye movements were so profound in response to sound that I could see just on the exam that there was something wrong with the superior canal—has elected never to have treatment. His most disturbing symptom was loud noises caused his eyes to move, so he's avoided loud noises.

Other people are more disturbed by the disorder. Some people develop eye movements that follow the rhythm of their pulse, and that's extraordinarily disturbing because you're constantly sensing motion. Another thing that's disturbing to people is hearing their own voice, this sense of autophony. Even a conversational voice reverberates and is uncomfortably loud, causing them to feel motion. The range of symptoms is quite diverse, so therapy has to be tailored to the individual.

Do people get this in both ears? In about one third of cases it's bilateral when diagnosed. Usually there's a more symptomatic ear, and we treat that ear first (although some have opted to have both ears treated, but not at the same time). In the minority, both ears appear to be equally affected.

How is this treated? The way we have treated this disorder is to mechanically inactivate the balance canal, to plug it with fascia (the covering of muscle) and tiny chips of bone taken from the patient. It's a tiny structure, so you need only the smallest amount of fascia and chips. We've used canal plugging with success. Bone cement is often used to cover the canal after it is plugged. You'd think that if the problem was the covering being missing, why not just replace the covering? In principle that sounds great. In practice, however, we found that function in the canal is often diminished before surgery, and replacing the covering itself may lead to inactivation of the canal anyway.

A person can function perfectly fine with five balance canals, so we believe the best treatment is to plug the canal. We can selectively inactivate one balance canal without affecting the other balance canals. Superior canal plugging is a procedure that usually takes about four hours and requires patients to be in the hospital for a couple of days. I had worked with that canal-plugging technique in a lot of my basic research, so I was comfortable with it as a surgical technique.

Are there preventative measures that can be taken or tests that determine whether a person is at risk for SCDS? There are screening tests that can be done. We've seen people in their teens and 20s that have this disorder. If someone is having symptoms that are suggestive of superior canal dehiscence, then the evaluation begins with a physical exam to determine if any of the distinctive signs like eye movements evoked by sound or pressure are present. A vestibular evoked myogenic potential test (a neurophysiological assessment technique to inspect the function of organs in the inner ear) can also show abnormalities characteristic of SCDS. A high-resolution CT scan can also be performed to look at the temporal bones for dehiscence.

You mentioned that 1 or 2 percent of the population could be at risk for SCDS. Do you know how many people are afflicted with this disorder? Experience with this is relatively new. When we started out, we thought, well, this is probably quite rare. We don't have enough data to give an actual number of people afflicted with the disorder, you can just see from the papers and the cases being reported that it may not be all that rare.

Why are we hearing more about SCDS recently? It's being better recognized because it's been in the medical literature now. Most major ear centers in the world now have experience with it and are comfortable making the diagnosis. It's also a gratifying diagnosis to make, because you can do something about it. The symptoms seem bizarre—I mean, hearing your eyes move. The first patient referred to me was referred by a psychiatrist because his symptoms were so bizarre that it was clear that something was going on. It's a neat story—there's good science in it and an effective treatment once you've made a definitive diagnosis, and the outcomes tend to be very good. It's the kind of thing you'd like to see more of in medical science: Start out with a mystery, come up with an explanation, develop the right screening tests to make the diagnosis, and then come up with an effective treatment.