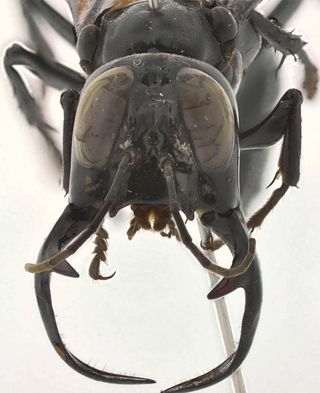 The newly discovered warrior was has giant jaws that are so long it may have used them to grasp a female during sex.
(Image: © Andrew Richards, Bohart Museum of Entomology)

A giant male wasp with jaws that, when open, are longer than its front legs was discovered on the Indonesian island of Sulawesi, researchers announced last week.

Researchers called the shiny black wasp, which is about 2.5 inches (6.4 centimeters) long, the "Komodo dragon" of the wasp family.

"Its jaws are so large that they wrap up either side of the head when closed. When the jaws are open they are actually longer than the male's front legs," said Lynn Kimsey, director of the Bohard Museum of Entomology at the University of California, Davis. "I don't know how it can walk." [See photos of wasp]

The giant jaws may serve as both protection and a way to ensure males' genes get passed on to offspring, the researchers speculate.

"We don't really know what the male jaws are for," Kimsey told LiveScience. "However, in another species in the genus, the males hang out in the nest entrance. This serves to protect the nest from parasites and nest robbing, and for this he exacts payment from the female by mating with her every time she returns to the nest. So it's a way of guaranteeing paternity."

Kimsey added, "The jaws are big enough to wrap around the female's thorax and hold her during mating."

Kimsey discovered the so-called warrior wasp on the Mekongga Mountains in southeastern Sulawesi during a recent biodiversity expedition.

"The first time I saw the wasp, I knew it was something really unusual," she said. "I'm very familiar with members of the wasp family Crabronidae that it belongs to but had never seen anything like this species of Dalara. We don't know anything about the biology of these wasps."

She named the insect-eating predator Garuda, after the powerful warrior of Hindu myth who is part human, part eagle.

The expedition was funded by a five-year grant from the International Cooperative Biodiversity Group Program.