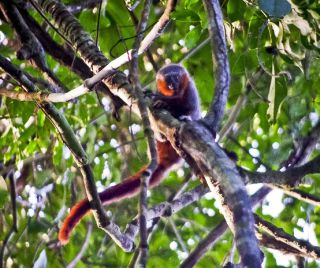 The researchers discovered what appears to be a new species of Callicebus, or titi, monkey, with unique features on its head and tail.
(Image: © © Julio Dalponte )

A possible new species of monkey has been discovered during an expedition in an unexplored part of the Amazon in mid-western Brazil.

A specimen, which scientists know is a type of Callicebus, or titi, monkey has been turned over to experts at the Emílio Goeldi Museum in the Brazilian state of Para, where it will be studied and formally described. [Amazon Expedition: An Album]

"This primate has features on its head and tail that have never been observed before in other titi monkey species found in the same area," said Julio Dalpone, the biologist who discovered the monkey during the World Wide Fund for Nature-backed expedition.

The expedition found the monkey between the Guariba River and the Roosevelt River in the northwestern part of the Brazilian state of Mato Grosso.

The 20-day expedition undertaken in December of 2010 explored four protected areas of the Guariba-Roosevelt Extractive Reserve, the Tucumã State Park and the Roosevelt River and Madeirinha River. It was intended to gather information to improve the management of these areas.

The team found 48 species of mammal, including armadillos, anteaters, deer and monkeys, as well as 313 species of birds, including some that had only previously been seen in other South American countries. Their survey of fish turned up possible new species, including a catfish, a small, brightly colored tetra, and very small fish known locally as 'piaus.' [In Amazon, New Species Discovered Every Three Days]

The area explored faces a litany of environmental and social problems, including illegal logging and fishing, pollution, the expansion of agriculture, violent conflicts over land, a lack of health or education services and electricity, plus a lack of oversight by state and federal authorities, according to the WWF.