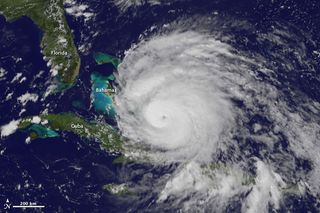 Watch out, New Yorkers and Northeasterners: Hurricane Irene is forecast to come uncomfortably close to New York City this weekend.

New Yorkers may think Manhattan is the center of the universe, but it's the edge of the Atlantic's hurricane alley. As history shows, hurricanes can and do storm through the metropolitan area and landfall here is not out of the question. With such a densely populated city, a citywide evacuation is nearly impossible (the subways can barely handle rush hour when it rains).

Do you know what to do if Irene hits? It's a good idea to make a plan now, since Irene is a real threat to strike New York City, officials say. [Related: Could New York Handle a Hurricane?]

"Everyone should keep an eye on the storm and pay attention to the Office of Emergency Management [OEM] when they put out some advisories on what we should prepare for as we get closer to the potential storm," Bloomberg said.

The latest forecast has a lot of wiggle room on the storm's northeastern path, but the storm could come near New York City Sunday evening (Aug. 28), according to the National Hurricane Center.

"There's a potential for it, but it's a little too soon to tell," said Dennis Feltgen of the National Hurricane Center.

Since records have been kept in the 1700s, dozens of hurricanes have passed through the greater New York City area, including a few major hurricanes.

On Sept. 3, 1821, a major hurricane slammed without warning into Manhattan, flooding everything south of Canal Street, according to historical accounts. The East River and the Hudson River converged over Lower Manhattan, but that part of the island had not yet been built up. Had the storm hit at high tide, the flooding would have been far worse, researchers say.

The benchmark by which all New York hurricane fears are measured is the so-called Long Island Express. Late in the summer of 1938, a storm that started off the coast of Africa arrived unexpectedly along the coast of New Jersey, where 140 mph (225 kph) winds tore up boardwalks. The storm raced north at more than 50 mph and uprooted trees and destroyed houses on Long Island. A U.S. Coast Guard station on Long Island measured a minimum pressure of 27.94 inches. Storm surges of 10 to 12 feet inundated portions of the coast from Long Island and Connecticut eastward to southeastern Massachusetts.

The 1938 storm showed just how dangerous storm surge can be in a bay. In Rhode Island, at the head of Narragansett Bay 30 miles from the Atlantic, the city of Providence awaited a fate its inhabitants could not have imagined. As the hurricane barreled toward the city, it pushed a surge of water up the bay. As the channel narrowed and became more shallow, the storm surge had nowhere to go but up. The mountain of water carried boats and houses into the capital, flooding the first floor of buildings in downtown, where workers were just preparing to go home.

The storm moved so quickly northward from North Carolina that it caught everyone by surprise. Since no warnings were issued, people fled only when they saw the storm approaching, and an estimated 682 to 800 people were killed, according to "Sudden Sea: The Great Hurricane of 1938" (Back Bay, 2004).

More recently, Hurricane Carol made landfall as a Category 3 storm on Long Island and Connecticut in 1954. In 1960, Hurricane Donna created an 11-foot (3.4-meter) storm surge in New York Harbor, causing extensive pier damage, according to the New York City Office of Emergency Management.

Hurricane Gloria in 1985 would have been "catastrophic" if it had hit at high tide and been just slightly closer to the city. As it was, it did several hundred million dollars' worth of damage, washing away piers and docks and destroying a few homes on the ocean-facing side of the island. There have been several other near-misses in the past six decades.

It's hard to say if Hurricane Irene will smack New York City, but history suggests it is only a matter of time before a major hurricane makes a direct hit. [Related: Which US Cities Are Most Vulnerable to Hurricanes?]

Even if Hurricane Irene doesn't hit NYC directly, flooding and strong winds are still possible. The U.S. National Oceanic and Atmospheric Administration forecast 12 inches (30 centimeters) of rain for New York City over the next five days.

"A major hurricane could push more than 30 feet [9 m] of storm surge into some parts of New York City," according to the Office of Emergency Management.

The OEM has set up evacuation zones throughout the city to shelter people who live within 10 blocks of the coast. (Click here to find out if you live in a hurricane evacuation zone.)

People who live in high-rise buildings should be ready to move to the 10th floor or below if winds become strong enough, the OEM says.

Feltgen, of the National Hurricane Center, said now is not too soon to take the hurricane threat seriously. People should be less worried about the exact path, he said, and be ready to deal with whatever Irene may bring.

"What they need to be concerned with is the possible impact of a hurricane — the key word being possible — and make sure they have their hurricane supplies," Feltgen told OurAmazingPlanet.