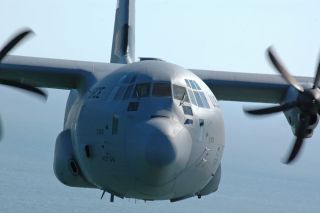 As Hurricane Irene has grown from nascent storm to full-blown hurricane — the first of the 2011 Atlantic season — the strengthening system has had plenty of human company in its swirling clouds.

Aircraft from two government agencies have been flying through the burgeoning storm to gather data and help monitor its progress.

On Saturday (Aug. 20), a massive WC-130J plane, equipped with a bevy of monitoring instruments, along with the trained eyes of the meteorologist and crew on board, headed into the storm.

"We did an investigative flight. You fly low over the ocean, about 1,000 feet [304 meters]," said Lt. Col. Jon Talbot, chief meteorologist with the Air Force Reserve 53rd Weather Reconnaissance Squadron, better known as the Hurricane Hunters.

In addition to sending back data, via satellite, to forecasters at the National Hurricane Center (NHC), Talbot said, "we're basically using our eyes to find circular motion."

Since Saturday, hurricane hunters have flown two flights a day into the increasingly violent weather system from their forward operating base on St. Croix, in the U.S. Virgin Islands. [Related: East Coast Braces for Hurricane Irene]

The flights typically last between eight and 12 hours, Talbot said, and the crew spends about five or six hours in the storm itself, flying an X pattern through the clouds.

In addition, on Monday (Aug. 22), the National Oceanic and Atmospheric Administration (NOAA) began flying a Gulfstream IV, a sleek jet with upturned wing tips, into the rough weather.

NOAA's G-IV (G4) aircraft, as it's known, has flown into Hurricane Irene twice, out of the MacDill Air Force Base in Tampa, Fla., and is scheduled for yet another flight this afternoon.

"That aircraft is flying in the environment surrounding the storm," said A. Barry Damiano, meteorologist flight director for NOAA's operations. The Gulfstream IV crew drops out a series of small instruments equipped with tiny parachutes, called dropsondes,  that hurtle down into the ocean, sending back reams of information as they go.

"They measure wind direction, wind speed and other data as they fall down to the ocean surface," Damiano said, "and that gives us a vertical profile of the atmosphere — all that is used as input for the forecast models that track the storm."

Yet another aircraft, NOAA's P-3, which, like the massive WC-130J, flies into the hurricane itself, will begin flights later today (Aug. 23).

Long before Irene ever got a name, the meteorologists who fly into storms were keeping an eye on what was then just a suspicious patch of weather out in the Atlantic Ocean.

"Typically, the most intense hurricanes come from these things we call tropical waves that form in the air around Africa, and move out into the Atlantic," Talbot said. "That's where Irene came from."

Both Talbot and Damiano told OurAmazingPlanet that Irene hasn't done anything out of the ordinary — yet.

"This is a typical hurricane. It was forecast to strengthen, and it's been following that pattern so far," Damiano said.

Both Talbot and Damiano are scheduled to be on board flights bound for Hurricane Irene's roiling center this week.

By the time a hurricane gets within about 300 miles (482 km) of landfall, there is basically an aircraft inside the storm at all times, Talbot said. Forecasters rely on the planes for data. Once storms are over land, forecasters can get those data from the vast network of weather instruments that cover the ground, but out over the ocean, airplanes have to do the work.

Hurricane Irene is now a Category 1 hurricane, packing maximum winds of 90 mph (150 kph), according to the most recent report from the National Hurricane Center. It is expected to re-strengthen to Category 3 status, making it a major hurricane, by tomorrow (Aug, 24) or Thursday (Aug. 25), the NHC said.

Talbot said that for those who live within the reach of hurricanes, it's important to be prepared no matter what a storm is predicted to do.

"You really can't let your guard down. Things can change rapidly," he said. "But that's why we're out there — to find those changes when they happen."