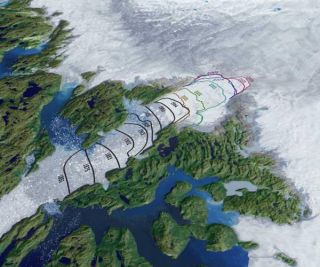 In this image, the location of the successive calving fronts of Greenland's Jakobshavn Isbrae glacier between 1851 and 2009 are overlain on a Landsat image from July 29, 2009. The retreat of the glacier shows the substantial melt that has occurred over the time period.
(Image: © NASA/Goddard Space Flight Center Scientific Visualization Studio)

Melting glaciers can alter Earth's gravity field, scientists have found, a discovery that is shedding light on when Greenland and Antarctica began heavily melting.

Knowing the timing of this melting could help climate scientists make better estimates of the potential sea level rise resulting from melting ice pouring off these two massive ice sheets.

Anything that has mass has a gravity field that attracts objects toward it. The strength of this field depends on a body's mass. Since the Earth's mass is not spread out perfectly evenly, this means its gravity field is stronger at some places and weaker in others.

Scientists were investigating the Earth's geoid, or the average gravity field across the globe. Over the past 20,000 or so years, the geoid should have been become rounder just as the planet has —the vast glaciers that once covered large swaths of the continents withdrew at the end of the last Ice Age, and since then the land that was once covered in ice has rebounded without the weight of ice pressing down on it, giving the Earth a more spherical shape.

However, starting about 20 years ago, scientists began noticing this rebound was getting offset by some unknown factor, causing the Earth's gravity field to stop changing its shape. To help solve this mystery, researchers recently analyzed gravity mapping data from the Gravity Recovery and Climate Experiment (GRACE) satellite.

The investigators discovered that water from ice melting in Greenland and Antarctica is apparently altering the Earth's gravity field. Mass once concentrated as ice at the poles is flowing into the oceans and spreading fairly quickly across the globe.

"Although these changes are very small, they can be detected by satellites," said researcher R. Steven Nerem, a satellite geodesist at the University of Colorado at Boulder.

This meltwater is drawn away from the poles toward the equator because of the rotation of the Earth. (Imagine a ball of pizza dough — it gets flatter when you spin it, as dough flies outward.) The result is a bulge around Earth's middle, balancing out any rounding effect from the withdrawal of glaciers.

By figuring out how much the rounding effect has been offset, scientists can potentially determine when the effect started, and thus, when the melting began.

"Glaciologists know that Greenland and Antarctica are melting, but it is harder for them to pin down when the melting started to change — they just don't have much data prior to the mid-1990s," Nerem told OurAmazingPlanet.

Understanding when changes in melting began is vital for predicting how this effect might proceed in the future.

"Our study helps narrow the time uncertainty somewhat — it says that the mid-1990s is roughly when the behavior of the ice sheets started to change."

The scientists detailed their findings online July 13 in the journal Geophysical Research Letters.