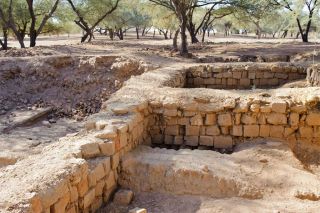 Only a small portion of the structure, possibly an ancient palace, has been excavated so far (part of it can be seen in the photo's bottom foreground) in central Sudan beneath another ancient palace. The structure is the oldest building ever found in the ancient city of Meroë.
(Image: © Photo copyright Royal Ontario Museum)

Hidden beneath an ancient palace in what is now central Sudan, archaeologists have discovered the oldest building in the city of Meroë, a structure that also may have housed royalty.

The capital of a vast empire that flourished around 2,000 years ago, Meroë was centered on the Nile River. At its height, the city was controlled by a dynasty of kings who ruled about 900 miles (1,500 kilometers) of territory that stretched from southern Egypt to areas south of modern-day Khartoum.

People of Meroë built palaces and small pyramids, and developed a writing system that scholars still can't fully translate today. Although Meroë has been excavated off and on for more than 150 years, archaeologists are not yet clear on how it came to be. The city seems to have emerged out of nowhere.  [Image Gallery: Ancient Rock Art of Sudan]

"In the region of central Sudan, we have an interesting research problem," said team leader Krzysztof Grzymski, a curator at the Royal Ontario Museum in Toronto, Canada.

"We are acquainted with the prehistory cultures, from Stone Age all the way through Neolithic, let's say until about 3000 (or) 2500 B.C." But after that "we have nothing, then out of the blue in 800 B.C., we have Meroë culture," Grzymski told LiveScience.

In addition to filling this gap, the presence of such an ancient building at Meroë suggests that an earlytemple dedicated to Amun, a highly regarded Egyptian god, may have existed as well. Archaeologists have speculated on its existence but have never actually found it.

By unearthing the oldest known building at Meroë and searching for even older examples, Grzymski is hoping to fill this gap.

"I'm looking for the origins of this Kushite, Nubian civilization," he said.

So far, the team has excavated a small section of the building, with radiocarbon dating indicating that it dates to about 900 B.C. The finds so far include a sizable mudbrick wall, pottery, and most notably, a cache of animal bones, most of which belonged to cattle.

"The most common animal kept in the Middle East now is goat and sheep," Grzymskisaid. "This makes me think if you try to envision this ancient civilization that to some extent they were seminomadic pastoralists." In other words, they relied heavily on beef and animal products in addition to agriculture.

It's difficult to say for certain what the building was used for, but Grzymskisuggests it was an early palace or administrative center. [In Photos: Survival of an Ancient Civilization]

"The very earliest Meroë, I suppose, would have been the capital of some sort of local chiefdom or kingdom," said Grzymski.

Search for an early temple

In the years leading up to World War I, John Garstang, a British archaeologist, discovered Meroë, uncovering an area filled with palaces and temples that he called the "royal city."

Many of his finds were never published, and over the past two decades, archaeologists have been going over Garstang's notes, publishing them and looking for clues as to Meroë’s origins.

"Architectural elements from what may have been an early Amun temple dating back to at least the seventh century were found during Garstang's excavations in areas later occupied by the Meroitic Royal City," writes David Edwards, of the University of Leicester, in his book "The Nubian Past: An Archaeology of Sudan" (Routledge, 2004).

Amun was an Egyptian god that the people of Meroë held in high regard.

If the temple exists, Grzymski said it would be the oldest temple in the city, a find that would offer clues to the religion of the civilization's first people. His team tried to find the structure using magnetometry, a technique that can detect archaeological remains by searching for anomalies in the magnetic field. The attempt was unsuccessful so in January 2012, they plan to launch a major dig to search for it. "The only way to search for this early Amun temple will be by excavating," said Grzymski.

It won't be a quick discovery; Grzymski said that he will take a yearlong sabbatical from the museum to search for the temple.

The research was presented in April at the annual meeting of the American Research Center in Egypt (ARCE).