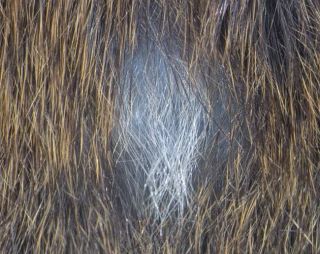 A mouse's regenerated hair after being wounded. The hair is white, researchers explain, because pigment cells are only in hair folliclesÃ¢â‚¬â€not in the skin itself, like in humans. If the wounding happened in a human, new hair would have color.
(Image: © Mayumi Ito/University of Pennsylvania School of Medicine)

Chopping off an amphibian’s arm is fairly inconsequential, considering a brand-new one can regenerate in three months. Now, research shows that a mouse’s hair follicles can do the same when its skin is wounded, sparking stem-cell-like machinery into action to produce fresh follicles.

The finding tears down 50-year-old dogma about mammals’ inability to regenerate hair-growing tissue, investigative dermatologists at the University of Pennsylvania School of Medicine said.

With scientific head-butting now aside, the researchers think doors to better hair loss treatments are little closer to opening.

Root of the problem

Hair follicles hang out in skin like the root of a weed, growing fresh hair when the hair itself is destroyed by your barber. But when a follicle is maimed by a cut, burn or other injury, it dies.

Thankfully, brand new hair follicles can grow in wounded skin — but how they do this has been misconceived until now, said George Cotsarelis, a co-author of the study detailed in today’s issue of Nature.

“Studies in the 50s determined hair follicles migrated from the edge of a wound,” Cotsarelis said. “But we think wounding induces a primitive, embryonic state in cells so they can be manipulated to produce hair follicles.”

Specifically, he said, a biological pathway called “Wnt” programs healing tissue to turn into hair follicles. When Cotsarelis and his colleagues super-charged Wnt pathways in mice and wounded their skin, double the normal follicles regenerated when the wound healed. Hair-raising treatments?

Losing a head of hair can be vexing for men and some women, especially because drugs like minoxidil only help “wake up” dormant hair follicles. They do not create new ones.

Damaging large patches of skin isn’t an attractive option for those wanting help with growing hair, and no one is talking about that as a treatment approach. However, understanding the pathways that cause haair follicle regeneration could yield effective drugs.

“If we’re lucky, I think it’s possible we’ll have some new ways to treat hair loss and bad scars in five to 10 years,” Cotsarelis told LiveScience. “And not just the hair loss, but also thinning hair.”

As people age, hair follicles lose their ability to crank out thick hair and produce thin strands instead. Yet new follicles grow thicker hair than older ones, Cotsarelis said, “so if we can reproduce that effect with a drug it would be huge.”

Cheng-Ming Chuong, a tissue engineer also at the Penn School of Medicine but not connected with the study, thinks the work has more far-reaching implications than a man’s confidence about his mane. The finding that an adult mouse can regenerate any tissue, even tiny hair follicles, is a milestone, he explained.

“When amphibians regenerate a limb, they regenerate everything — it’s hard to tell anything was dismembered,” Chuong said, adding that mammals may have similar machinery in place.

Still, Chuong doesn’t expect losing an arm to become a problem of the past any time soon. “Although this discovery holds a lot of promise for regenerative medicine, we’re nowhere near growing new limbs yet,” he said.