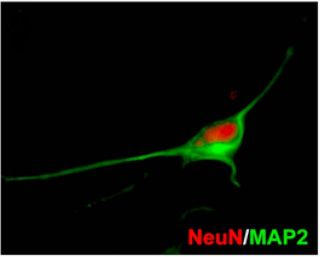 A brain cell made from a skin cell. The red marks a protein that is specific to the nucleus of a brain cell, while the green is the cell's inner scaffolding.
(Image: © Qiang, et al., Cell. )

Researchers for the first time have turned human skin cells into working brain cells, completely bypassing the need for stem cells, they say.

The achievement comes a year after researchers at Stanford University performed the same feat in mice, turning cells from the rodents' skin into neurons.

The lab-created brain cells act the same as normal human brain cells, the researchers found: They have the same ability to send electric signals; they seem to express the same genes in the same ways; and they are able to communicate with other brain cells, as demonstrated in a lab dish and when implanted into mice.

Being able to produce brain cells in the lab could help develop treatments for Alzheimer's and other neurodegenerative diseases, the researchers said. [Inside the Brain: A Journey Through Time]

Researchers reported several differences between these manufactured Alzheimer's brain cells and the cells of healthy patients, including the way they process and destroy a protein called the amyloid precursor protein (thought to be the main culprit of the disease). They can be used to study the mechanism of Alzheimer's development and test potential treatments, without having to harvest the cells from a living human's brain.

Stem cells are an important biomedical tool, because they can be turned into any kind of cell (a characteristic called pluripotency). They have the potential to act as a replacement part for a failing tissue or organ. While embryonic stem cells, which come from fertilized eggs, are naturally pluripotent, adult stem cells — created from cells from an adult  — must be chemically manipulated to "turn back the clock" and give them pluripotency (these are called induced pluripotent, or iPS, cells).

The usefulness of adult stem cells is still up for debate. Researchers reported earlier this year that mice rejected such cells, possibly because the process of turning back the clock caused changes to how and which genes are expressed in those cells.

These new skin-to-brain cells do not undergo that process of turning back the clock.

This "is fundamentally different from making neurons with iPS technologies," study researcher Asa Abeliovich, of the Columbia University Medical Center, said in a statement. "You could, in theory, take someone's skin cells and in a couple of weeks have fully functional neurons ready."

The study was published today (Aug. 4) in the journal Cell.