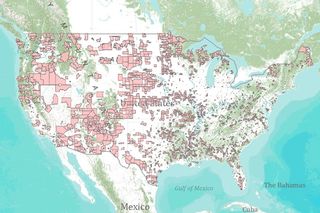 With several leading grocery chains on board, first lady Michelle Obama has embarked on a campaign to bring healthy food to the country's "food deserts." These are areas where residents lack easy access to nutritious groceries, such as fruits and vegetables, and often suffer health consequences associated with a nutrient-poor diet.

The initiative will focus its efforts on food deserts identified in a 2009 report by the U.S. Department of Agriculture. In the report, the USDA analyzed the food situation in each 1-square-kilometer tract of the entire country. They ascertained the condition of each region in this fashion: If 500 people and/or 33 percent of a particular tract's population lived more than 1 mile from the nearest grocery store (or, for rural tracts, 10 miles), and the local poverty rate was significant, then the tract was designated a food desert.

By the USDA's assessment, a whopping 23.5 million people, or 8.4 percent of all Americans, live in food deserts. Paradoxically, obesity rates in these areas are some of the nation's highest, as the unavailability of healthy sustenance may make prepackaged junk food the only option. Diabetes, heart disease and cancer are also linked to low fruit and vegetable intake.

As seen on the USDA's food desert map, malnutritious regions are scattered across the nation. Eastern Oregon, northern Maine, parts of Nebraska, and much of Arizona and New Mexico are particularly bleak. In northern Arizona, for example — a desolate food desert — the report found that there are thousands of people too poor to own cars who live more than 10 miles from the nearest supermarket.

Several major grocery chains have teamed up with Michelle Obama to fill in the nation's food gaps. Walmart, for example, plans to open 300 stores in food deserts over the next five years, in which they'll sell low-priced fruits, vegetables and other healthy food options. Similarly, the pharmacy Walgreens committed to convert or open at least 1,000 "food oasis" stores — stocked with fresh produce and the like — in these areas in the next five years.