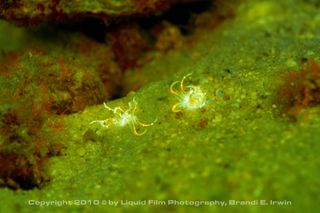 The ocean floor becomes a multi-hued black light poster in an upcoming photography exhibit that shows coral, fish and other marine life in luminous reds, greens and oranges.

Using a special light and camera filter, underwater photographer Brandi Irwin captures ocean animals fluorescing. These aren't creatures that glow with their own bioluminescence; rather, Irwin uses a near-ultraviolet light to bring out hues that the naked eye can't see. The effect is a bit like diving with a black light.

To catch light-shy marine animals on film, Irwin dives on moonlit nights. A model and fashion photographer by day (she does underwater fashion shoots), Irwin started SCUBA diving as a teenager. After a fluorescent night-diving expedition in the Caribbean, the New York resident realized she had a new subject on her hands.

"I realized I was dealing with subjects that had never been seen at the surface," Irwin told LiveScience. "And that's when I realized I wanted to bring that to the surface and let people see what's going on down there." [See Irwin's work: Gallery of Glowing Sea Creatures ]

Irwin's show, "Something Special Underwater," runs from Aug. 5 to Aug. 31 at the New York Aquarium.