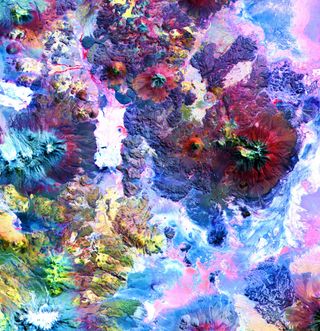 Along the Chile-Bolivia border in the Andes, volcanoes come to life in this image taken by instruments aboard NASA's Terra satellite.
(Image: © NASA GSFC, MITI, ERSDAC, JAROS, and U.S./Japan ASTER Science Team.)

In this image of the Andes along the Chile-Bolivia border, the visible and infrared data have been computer enhanced to exaggerate the color differences of the different materials. The upper right two-thirds of the scene shows the Pampa Luxsar lava complex. Lava flows are distributed around remnants of large dissected cones, the largest of which is Cerro Luxsar. On the middle left edge of the image are the Olca and Paruma stratovolcanoes (colored red in this composite). This image covers an area 37 miles by 37 miles (60 by 60 kilometers) in three bands of the reflected visible and infrared wavelength region. It was acquired on April 7, 2000, by the Advanced Spaceborne Thermal Emission and Reflection Radiometer (ASTER) on NASA's Terra satellite.