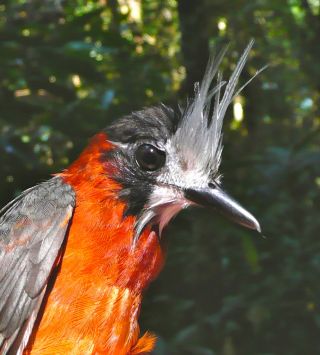 The White-plumed Antbird is one of the bird species that has gone "extinct," then returned, several times to portions of the Amazon rain forest.
(Image: © Philip Stouffer | LSU)

Bird species previously believed to have gone extinct due to deforestation in sections of the Amazon rain forest have nearly all reappeared over the past 20 years.

The researchers measured bird populations in 250 acres of the Amazon rain forest near Manaus, Brazil, before deforestation and then about every seven years after deforestation began. Their counts showed the return of several species previously thought to have gone extinct in these localized areas.

Here's what the scientists think occurred: Despite the deforestation, fragmented sections of the forest were left standing thanks to policies that required landowners to leave a portion of the area uncleared.Over time, agriculture in the rain forest began to diminish, and the fragmented areas that were nearby forests began to recover, with bird species returning. [Ten Species Success Stories]

Of the 101 species captured and counted before the deforestation began, the researchers detected that 97 had returned to at least one of the forest fragments in 2007.

"Our samples are snapshots in time," study leader Philip Stouffer said in a statement. "They show that forest fragments have the potential to recover their biodiversity if they're in a landscape that can rebound. They're not doomed."

The findings were published today (June 23) in the journal PLoS ONE.