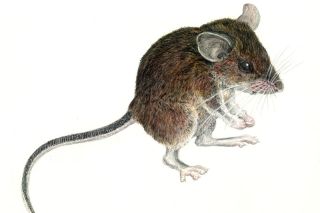 This color drawing shows Apomys brownorum, one of the new species from Mt. Tapulao, Zambales, on the Phillipine island Luzon.
(Image: © Velizar Simeonovski, The Field Museum.)

Seven new forest mouse species have come out of hiding on Luzon, the largest island of the Philippines, researchers announced Monday (June 21).

The discovery of the new species, which reside only on a small part of the island, has increased the number of Luzon's native mammal species, excluding bats, to 49.

Observations of each mouse's morphology as well as genetics suggest the seven newbies are part of a new subgenus called Megapomys, which is part of the genus Apomys. These mice are relatively large, weighing less than a half pound (65-110 grams) and sporting tails that are as long as, or slightly shorter, than the length of the animal's body and head.

Two of the newly found species live on Mount Tapulao in the Zambales Mountains, two live on Mount Banahaw, an active volcano in the Philippines, while another two species reside in the Mingan mountains of the Aurora Province and another species in the Sierra Madre mountain range of northeastern Luzon. [Gallery: Evolution's Most Extreme Mammals]

"These are wonderful little mice that live in forested regions high in the mountains. Although they are often abundant, they actively avoid humans and rarely cause any harm," said project leader Lawrence Heaney of The Field Museum in Chicago. "They prefer to eat earthworms and seeds on the forest floor," said Heaney, who is the lead author of the article published in the May 2011 issue of the journal Fieldiana.

Philippines officials and researchers alike point out that the findings highlight the need to protect mountain forest habitats against logging, agricultural expansion and illegal mining activities.

"Although small in size, these little animals are part of our biodiversity, which forms the basic foundation of healthy ecosystems," said Romeo Trono, country executive director of Conservation International-Philippines.