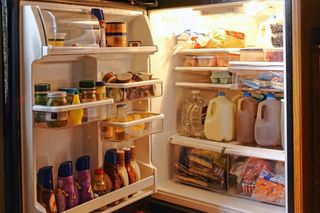 Americans toss out 14 percent of the food that they buy.
(Image: © Dreamstime)

Flying in the face of global shortages, skyrocketing prices and widespread hunger, wasting food is a common practice in the United States. Americans generate 34 million tons of food waste per year, making it the single largest component of municipal solid waste reaching landfills and incinerators.

A lot of the wasted food is thrown out after spoiling in the backs of the nation's fridges. We might feel guilty tossing it, but, frightened by frequent news of salmonella outbreaks or deaths from E. coli poisoning, we're nonetheless unwilling to risk ingesting yogurt, milk, or eggs past their "use-by" date. We throw out 14 percent of the food we buy.

But, it turns out, in going strictly by use-by dates — the great drivers of waste — we throw out a lot of perfectly good food. Use-by dates aren't entirely useless, one expert says, but they're not as useful as common sense.

Hurd explained that the Food and Drug Administration develops sell-by, use-by, and best-before dates based on standard studies of food spoilage. "Sell by" represents the earliest time that a product might start to spoil. The "use by" or "expiration" date is when it is expected to go bad.

"Best before" is more of a taste thing than a health one.

"But these dates should just be treated as guidelines or suggestions," Hurd said. In fact, the FDA says the same thing: with the exception of expiration dates on infant formula and some baby foods, use-by dates that appear on food packages are simply guidelines, not hard-and-fast rules.

"The reason sell-by dates are hard to nail down is it depends so much on how the product is handled before it gets to the consumer," Hurd told Life's Little Mysteries, a sister site to LiveScience. "That's going to be variable depending on what part of the country you're in and which companies processed the food; the product might last much beyond the sell-by date or spoil before it."

There's no magical threshold after which a certain food harvested on a certain date suddenly goes bad, he said. "All food has bacteria in it all the time. Even when it's brand spanking new and perfectly fresh, if you take it to a microbiologist they will be able to cultivate bacteria. As that bacteria grows, there's a continuum along which food becomes more harmful. "

"It's all a matter of dose," he said. Not even salmonella, the ultimate food fear, is harmful in small doses to most people. "The average person can eat 1,000 salmonella bacteria and not get sick." As long as you aren't "immuno-compromised" in any way — as the elderly are, as well as those who have an illness that weakens their immune system — the acids in your stomach can kill significant quantities of salmonella without a problem.

If you can't go strictly by the use-by date, and you don't have an in-house microbiologist, how can you tell if there's too much salmonella in your meat? It turns out you have a pretty good, if primitive, microbiology lab: your nose.

Dangerous food pathogens such as salmonella, listeria and E. coli don't directly rot food, and thus don't produce any decomposition smells, but other bacteria that spoil food grow alongside these harmful bugs. [Read: How Does Salmonella Contaminate Vegetables?]

According to Hurd, the food rot can serve as the canary in the coal mine. "The 'spoilage bacteria' will usually notify us if we're getting too much bacterial growth," he said. If there is enough spoilage bacteria to produce an odor, there's a good chance that salmonella and the others are present in dangerous quantities as well.

In brief, use the powers of smell and taste that nature gave you. "What one has to do is look at the expiration date of milk, for example. If it's past or near that date, then take a small taste. Spoilage bacteria is your clue," Hurd said.

If it doesn't taste funky, don't throw it out: You can probably drink it without worry.