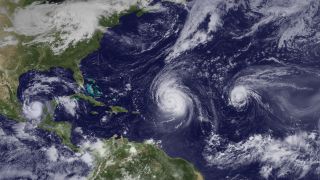 Hurricanes Karl, Igor and Julia (from left to right on Sept. 16) were part of the onslaught of Atlantic storms last hurricane season (2010).
(Image: © NOAA.)

Start preparing now: This year's hurricane season is expected to be an active one.

On the heels of an already violent tornado season and other wild April weather, the 2011 hurricane season may see 12 to 18 named storms and six to 10 hurricanes, an above-average season.

That's the forecast from the National Oceanic and Atmospheric Administration (NOAA), released today (May 19) for the Atlantic basin, which includes the East Coast, the Caribbean Sea and the Gulf of Mexico. If the forecast is anything like last year's, it should be taken very seriously.

"If you live along the Gulf Coast or live along the Atlantic Coast, you've had your notice," said Craig Fugate, director of the Federal Emergency Management Agency (FEMA). "It's going to be an above-average season."

The 2010 season was one of the busiest ever, with 12 hurricanes in the Atlantic  — the second-highest number on record, tied with 1969 — and 19 named storms (which include tropical storms and hurricanes) — a tie with 1887 and 1995 as the third-busiest on record. The 2010 forecast called for 17 named storms and 10 hurricanes.

Several climate factors will play a role in this year's hurricane season, including warm Atlantic Ocean water, where sea surface temperatures in areas where storms often develop and move across the Atlantic are up to 2 degrees Fahrenheit (1.1 degrees Celsius) warmer than average, according to NOAA.

An ocean-atmosphere phenomenon called La Niña, which results in a cooling of the equatorial Pacific Ocean, has been linked to an increase in hurricane activity for the continental United States and the Caribbean. And though it continues to weaken and is expected to dissipate later this month or in June, its impacts — including reduced wind shear — are expected to continue into the hurricane season, according to forecasters.

Forecasting if and where the storms will make landfall is "next to impossible," said Jane Lubchenco of NOAA, and this year's forecast does not make any predictions about landfall, which is driven by weather patterns at the time the storm approaches. None of last year's storms made landfall in the United States, but Mexico and earthquake-ravaged Haiti got clobbered.

"The U.S. was lucky last year," Lubchenco said. "We cannot count on the same luck this year."

"Far too many people will not be prepared and will try to get ready in the last few minutes when hurricanes threaten their communities and they won't have time," Fugate said.

Since May 1, hurricane hunters have been touring East Coast cities to raise public awareness of hurricanes. Officials said it's important to have an escape plan, or a week's worth of food, water and medicine well ahead of the start of hurricane season. For more on hurricane preparedness, visit the National Hurricane Center's webpage.

This year's storm names are: