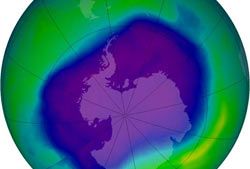 For the first time, scientists have found convincing evidence that the gargantuan hole carved in the ozone layer by man-made chemicals is steadily shrinking. That mean a policy enacted 22 years ago called the Montreal Protocol is working: The 1989 ban on the use of chlorofluorocarbons (CFCs) — toxic chemicals used in air conditioners and solvents that eat away at ozone molecules — has helped the Earth to regain some of its lost protective ozone.

The "ozone hole" is not really a hole, but rather a region above Antarctica where the ozone layer — the 15-mile-thick blanket of O3 molecules that acts as our planet's natural sunscreen — is very, very thin.

That the ozone above Antarctica is thickening again is universally good news for life on Earth. The ozone layer absorbs as much as 99 percent of the sun's dangerous high-frequency ultraviolet light, making Earth habitable. [Read: Is Ozone Good or Bad?]

Atmospheric scientists previously observed that levels of ozone-depleting CFCs were falling in the stratosphere (the level of atmosphere between 5 and 30 miles up in the sky) above Antarctica. Because that's where the ozone hole is, they suspected that the drop in CFCs might correspond to a thickening of ozone, but until now, couldn't prove it. The average ozone levels were observed to fluctuate dramatically from one spring to the next, so that little could be said about the hole's average size.

Now a team of environmental scientists led by Murry Salby at Macquarie University in Sydney, Australia, have identified the cause of the annual fluctuations in ozone. By removing the fluctuations from the data, they produced a baseline of systematic change in Antarctic ozone levels. As detailed in the new issue of the journal Geophysical Research Letters, the team's calculations reveal that the ozone hole is 15 percent smaller than it was at its maximum in the 1990s.

Salby told the site Nature.com that the swings in ozone levels from spring to spring result from a weather pattern known as dynamical forcing. During winters when this effect is pronounced, more cold air gets trapped in the stratosphere above the South Pole, and as a result, more ice crystals form in the atmosphere. When the sun hits these in spring, they serve as platforms upon which chlorine can chemically react with ozone, breaking it apart. Consequentially, "[if] you know what the stratospheric forcing is during the winter, you can predict rather accurately the ozone level for the following spring," Salby said.

Underlying the yearly variations, however, is a consistent, downward-sloping trend in the size of the ozone hole.

"I think this is the first convincing observationally-derived evidence of the ozone rebound," Adrian McDonald, an atmospheric scientist at the University of Canterbury in Christchurch, New Zealand, told the press. "It's the first where the statistical significance is high enough, and you can see the pattern well enough, that you feel comfortable in believing it."