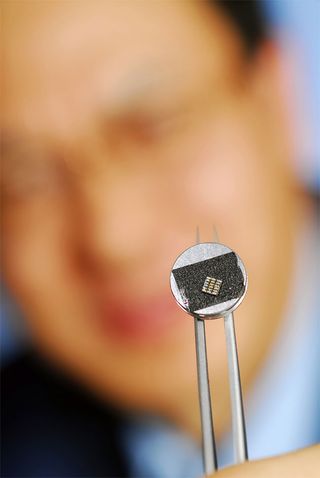 Are you tired of keeping track of all those little chargers for your phone, your music player and your other little electronic gadgets? Professor Zhong Lin Wang of the Georgia Institute of Technology may have the answer.

Wang has created a tiny nanogenerator that produces a continuous flow of electricity by harvesting mechanical energy from its surroundings. It can produce energy from ultrasonic waves, mechanical movement or even blood flow.

The prototype nanogenerator is made up of tiny wires that are free to flex just slightly. When moved by mechanical energy, they flex and make contact with a collection plate. The wires have piezoelectric qualities, meaning that they provide a tiny voltage when mechanical stress is applied. By capturing the output of large numbers of nanowires in motion, the prototype nanogenerator produces a miniscule direct current output.

Wang and his group believe that the nanowires could produce as much as 4 watts per cubic centimeter. "If you had a device like this in your shoes when you walked, you would be able to generate your own small current to power small electronics," Wang noted. "Anything that makes the nanowires move within the generator can be used for generating power. Very little force is required to move them."

Science fiction fans are always looking for ways to enable the creation of their own favorite devices. For example, the stillsuit from Frank Herbert's 1965 novel Dune made use of the body's own mechanical energy to provide power for the suit, which captured perspiration and other body moisture and processed it for reuse.

Read more stories about other attempts at harvesting power from mechanical motion:

Read more about how a Nanogenerator Provides Continuous Electrical Power.