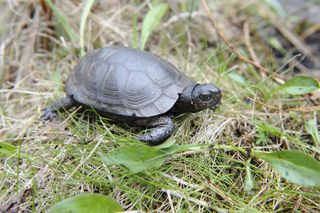 The smallest turtle in North America is getting more and more scarce, and researchers are banding together to find out why.

At 4.5 inches (11.4 centimeters) long, the North American bog turtle, or Glyptemys muhlenbergii, is the smallest turtle species on the continent. It can be found in marshes across the eastern U.S., but wildlife managers in the Northeast have noticed higher-than-average rates of bog turtle deaths over the past few years, according to the Wildlife Conservation Society (WCS). [Image of smallest turtle]

Along with state and federal wildlife agencies, WCS is beginning a bog turtle checkup in search of a cause for these mysterious deaths. Researchers will conduct physical exams on wild turtles and take blood and fecal samples for analysis.

"We're conducting a broad screening in order to identify a cause or causes for the increase in bog turtle deaths," Bonnie Raphael, WCS's Department Head for Wildlife Medicine, said in a statement. "This information will be used to help determine if these recent losses are attributable to infectious disease, environmental perturbations or other factors."

The bog turtle is listed as "threatened" by the U.S. government and as "endangered" in New York, Massachusetts and by the International Union for Conservation of Nature. According to the New York Department of Environmental Conservation, the main threats facing bog turtles are loss of habitat to development and the illegal pet trade. Pesticides and agricultural and industrial run-off may also threaten the turtle's habitat and food supply.