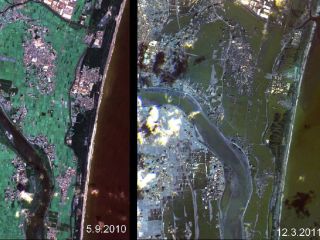 These images show the effects of the tsunami on Japan's coastline. The image on the left was taken on Sept. 5, 2010; the image on the right was taken on March 12, 2011, one day after an earthquake and resulting tsunami struck the island nation.
(Image: © German Aerospace Center (DLR)/Rapid Eye )

(ISNS) — The devastating 2004 Indonesian tsunami, with its death toll of as many as 250,000 people, was caused by the first magnitude-9.0 earthquake since 1967. A succession of smaller but still destructive tremors in Haiti, Chile, and New Zealand — surpassed by this year's magnitude-9.0 quake in Japan — has some researchers wondering whether the number of large earthquakes is on the rise. An earthquake represents the abrupt release of seismic strain that has built up over the years as plates of the Earth's crust slowly grind and catch against each other. Giant earthquakes live up to their fearsome name. The biggest ever recorded was the magnitude-9.5 Chile earthquake of 1960. It accounts for about a quarter of the total seismic strain released worldwide since 1900. In just three minutes, the recent quake in Japan unleashed one-twentieth of that global total according to geophysicist Richard Aster at the New Mexico Institute of Mining and Technology in Socorro. The Indonesian quake "reinvigorated interest in these giants," said Aster, who is also president of the Seismological Society of America. The Chile and Japan earthquakes — along with a magnitude-9.2 quake in Alaska in 1964 — also triggered catastrophic tsunamis. After a lull in large quakes in the 1980s and 1990s, we may now be in the middle of a new age of large earthquakes, Aster added. Records from the past century reveal some periods that have seen an unusual number of giant earthquakes, defined as those with magnitude 8.0 or higher. For example, global seismic data show a dramatic spike in the rate of large earthquakes from 1950-67. But there have also been quiet periods with fewer large quakes. And with only 100 years worth of records to consult, researchers aren't sure what these patterns of large quakes might mean -- or whether they mean anything at all. Even if clusters of giant earthquakes are a real phenomenon, Aster noted, researchers don't have any good ideas on how one big quake can trigger another big one in a different part of the world. Earthquakes are well known to generate smaller aftershocks, including some at great distance. The Japan quake spawned small tremors as far away as Nebraska. But Andrew Michael, a geophysicist at the U.S. Geological Survey in Menlo Park, Calif., has studied the patterns in large earthquake occurrences that remain once aftershocks are removed from the picture. "Overall, the pattern is random," he said. Apparent clusters of large quakes can be explained simply as statistical flukes. "Random doesn't mean evenly spaced out," Michael added. That's why quakes can seem to bunch together in the historical record. He cautioned that such clusters may not mean anything for predicting future earthquakes, or for explaining how a cluster of quakes might occur. He compared the pattern to a baseball player's hitting slump. "It could mean that he needs to change something in his game. Or it could just be a random streak," Michael said. Further evidence against the significance of apparent clustering came in a recent study by Don Parsons of the U.S. Geological Survey in Menlo Park and Aaron Velasco of the University of Texas at El Paso, published in Nature Geosciences. They found that large earthquakes do not generate other large quakes on a global scale. Aster acknowledged that the rarity of large earthquakes means that questions about possible connections between them are difficult to answer. "We see magnitude-7 earthquakes only 15 or so times a year and magnitude-9 earthquakes only a few times a century," he said. Michael said that until researchers know more about why the rate of large earthquakes varies over time "we shouldn't be worrying less, but there's no need for panic either." The recent spate of giant earthquakes may not signal more to come, but Aster said that "it's undeniable that we're becoming more and more vulnerable to the effects of earthquakes in general." Aster added that many rapidly growing cities around the world aren't prepared for a large quake, while at the same time coastal communities are expanding into tsunami-prone  areas. "We just have more people in precarious places," he said.