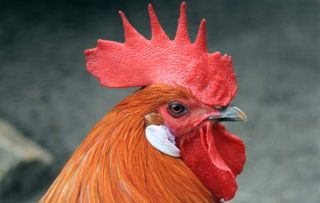 Under the right circumstances, a hen can actually transform herself into a cock.
(Image: © Gvision | Dreamstime)

A British couple was surprised to witness their pet hen Gertie gradually transforming into a rooster. No, this is not an early April Fools' Day prank. Chickens really can undergo natural sex changes.

The first sign that something was afoot with Gertie was that she stopped laying eggs, her owners, Jim and Jeanette Howard of Huntingdon, England, told the local media. Next, she began strutting around their garden and crowing like a rooster. Over the next few weeks, Gertie put on weight and developed wattles beneath her chin, a feature normally exhibited only by males. She also grew dark brown plumage and a scarlet cockscomb atop her head, both male traits.

''I know it sounds ridiculous but I can assure you it's all true," Jim Howard told cambridge-news.co.uk. "People think it's a bit weird but apparently its one of those things that does happen."

"Sex reversals do, in fact, occur—although not very frequently," states a 2000 report published by the University of Florida's Institute of Food and Agricultural Sciences. "To date, however, spontaneous sex reversal from male to female has not been reported."

That's because the mechanics of this biological phenomenon seem to work in only one direction. Normally, female chickens have just one functional ovary, on their left side. Although two sex organs are present during the embryonic stages of all birds, once a chicken's female genes kick in, it typically develops only the left ovary. The right gonad, which has yet to be defined as an ovary, testes, or both (called an ovotestis), typically remains dormant.

Certain medical conditions—such as an ovarian cyst, tumor or diseased adrenal gland—can cause a chicken's left ovary to regress. In the absence of a functional left ovary, the dormant right sex organ may begin to grow, according to Mike Hulet, an associate professor at Penn State University's department of poultry science.

"If the activated right gonad is an ovotestis or testes, it will begin secreting androgens," Hulet told Life's Little Mysteries. Androgens are the class of hormones that are largely responsible for male characteristics and are normally secreted by the testes. "The production of androgen would cause the hen to undergo behavioral changes and make it act more like a rooster."

The hen does not completely change into a rooster, however. This transition is limited to making the bird phenotypically male, meaning that although the hen will develop physical characteristics that will make her look male, she will remain genetically female. So while the hen will no longer lay eggs, she won't be fathering any offspring, either.

As for Gertie, the Howards have renamed the hen Bertie after her sex change.

This article was provided by Life’s Little Mysteries, a sister site to LiveScience.com. Follow Remy Melina on Twitter @RemyMelina