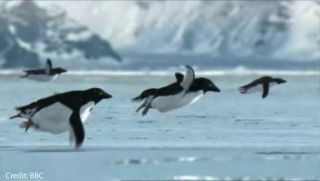 On the first morning in April 1976, BBC Radio 2 astronomer Patrick Moore announced the approach of a once-in-a-lifetime astronomical event. At 9:47 a.m., Moore said, the planet Pluto the would pass directly behind Jupiter, and at that moment their gravitational alignment would counteract and thus lessen the pull of Earth's gravity. Moore told his listeners that if they jumped in the air at the exact moment of this planetary alignment, they would experience a strange floating sensation. At 9:48, callers flooded the lines of BBC 2 with stories of their brief buoyant experiences.

The flurry of worry about the March 19, 2011 "Supermoon," which people feared would set off earthquakes and other cataclysmic events, showed the public hasn't come very far in its understanding of astronomical influences since the 1976 prank. [Stop the Lunacy! 5 Mad Myths About the Moon]

On April 1, 2008, the BBC played footage of a colony of flying penguins that it claimed had just been discovered on King George Island near Antarctica. In the "mockumentary," former Monty Python star Terry Jones played the David Attenborough-esque guide.

"We'd been watching the penguins and filming them for days, without a hint of what was to come," Jones said. "But then the weather took a turn for the worse. It was quite amazing. Rather than getting together in a huddle to protect themselves from the cold, they did something quite unexpected, that no other penguins can do."

Though penguins can't actually get airborne — not even when Terry Jones is around — the mechanics of how they swim are remarkably similar to how birds fly.

The April 1999 edition of Red Herring Magazine, then a successful tech/business publication, included an article about a revolutionary new technology that allowed users to compose and send email messages of up to 240 characters... telepathically. The article attributed the new development to computer genius Yuri Maldini, who had supposedly created it as a spinoff of the encrypted communications systems he developed for the U.S. Army, during the Gulf War. The article even describes an incident when Maldini answered his interviewer's question telepathically, via email. Red Herring received numerous letters from fooled readers.

Telepathic email may not seem as ludicrous now as it did then. Mind-controlled technologies, such as a thought-driven car now under development in Germany, are getting a boost in recent years from revolutionary neuroscience research. [Super-Intelligent Machines: 7 Robotic Futures]

In 1998, the online edition of Nature pulled what may be the most cerebral April Fools' Day prank in history. In an article discussing the debate over the origin of birds, the writer refers to the discovery of "a near-complete skeleton of a theropod [T. rex-like] dinosaur in North Dakota." Dubbed Smaugia volans, paleontologists believe the dino "could have flown."

The skeleton, including rib and neck bones that showed signs of frequent exposure to fire, was supposedly discovered by Randy Sepulchrave of the Museum of the University of Southern North Dakota.

There is no University of Southern North Dakota. That clue-in is straightforward enough, but the other two are more obscure: First, Smaug was the name of the dragon in JRR Tolkien's "The Hobbit." Secondly, Sepulchrave was the 76th Earl of Groan in Mervyn Peake's Titus Groan. The earl believed that he was an owl, and leapt to his death from a high tower. He discovered too late that he could not fly. [Are Dragons Real? Facts Behind the Creatures]

In April 1996, Discover Magazine reported that physicists had discovered a new fundamental particle of matter: the bigon. Like other recent particle finds, the bigon flutters in and out of existence in mere millionths of a second, they explained. But unlike the others, this one is the size of a bowling ball.

Physicist Albert Manque — not a real person — and his colleagues at the Centre de l'Étude des Choses Assez Minuscules in Paris — not a real institute — supposedly found the particle by accident, when a computer connected to one of their vacuum-tube experiments exploded. "The physicists set up a video camera and repeated the experiment — with the same explosive results," Discover journalist Tim Folger wrote. "In one of the video frames a black bowling-ball-size object hovered above the wreckage of the computer. In the next frame it was gone."

Discover's parody of science-speak is truly impressive: "The researchers believe that the electric field in the vacuum tube somehow altered the energy state of the vacuum inside the cathode-ray tube in the nearby computer monitor. No vacuum is truly empty — virtual particles, most of them quite small, continually burst into existence and then dissolve back into the void. The physicists believe that they accidentally generated an electric field of just the right size in the computer to nudge a new particle — a bigon — into being," Folger wrote.

Despite absurd claims that the bigon might be responsible for a host of unexplained phenomena such as ball lightning, sinking souffles, and spontaneous human combustion, and despite the April 1 publication date, the fake story generated a huge response from readers.