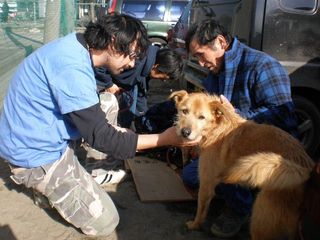 Japanese vet Dr. Sasaki treating dogs at one of the evacuation centres in Sendai City. He's already seen over 20 animals who need medical care in the past two days.
(Image: © JEARS)

Once the massive earthquake had hit his home in Sendai, Kamata-san ran to alert his neighbors of a possible tsunami, and his dog, Shane, escaped from his yard. Once the colossal flood had washed in, Kamata-san couldn't find Shane and thought the worst.

About six hours after the wall of water washed through his home, Kamata-san hears that a dog has shown up outside the shelter where he was staying. Miraculously Shane had found his way to the shelter and back to his owner. The Akita dog had scratches on its leg likely from clinging to debris as the water rose, so animal rescue workers gave him antibiotics. [Photos of Japan's Rescued Pets]

Some Japanese pets and pet owners are not as lucky as Kamata and Shane.

In the face of great human tragedies from the earthquake and tsunami that devastated Japan on March 11, there is one group of victims finally gaining notice: pets. In response, several rescue groups have jumped to aid these injured and abandoned four-legged survivors.

"We’re at the beginning stage of trying to find out how many animals are out there," David Wybenga, of Japan Cat Network, told LiveScience. "There are a lot of unknowns." This network, along with rescue groups Animal Friends Niigata and Arkbark, have formed a coalition called Japan Earthquake Animal Rescue and Support (JEARS) focused on the animals left behind.

The coalition has been taking in stranded animals, coordinating the pickup of pets that had to be abandoned, and dropping off food and supplies at shelters and for anyone in need. Jennifer O'Donnel, the Japan Logistics Coordinator for World Vets, said in an email that she expects there will be at least 10,000 animals that end up in local shelters and rescue organizations, most of those being cats and dogs. (World Vets is a non-government organization that provides veterinary aid around the globe.)

The threat of radiation from the damaged nuclear power plants is also making the rescue difficult. The radiation could have health consequences for both the animals and humans. The teams have just started venturing into the radioactive zone to rescue the animals there.

"The dynamic of every disaster is that the human-centered concerns dominate. The animal-related impacts emerge as a subsequent concern," said Bernard Unti, senior policy adviser for Humane Society International. The animal-centric worries are just starting to emerge, and it will be a long road to recovery, he said.

Several groups are touring the damaged areas and handing out supplies, including pet food, water, gasoline and medications, to pet owners. One such group, led by Isabella Gallaon-Aoki of Animal Friends Niigata, is also rescuing pets, those that might be roaming the streets or left behind by evacuated owners.

Many animals have been rescued or reunited with their owners, though in the worst-hit areas many are missing. "It’s a huge area to cover, and there are lots of little isolated communities," Gallaon-Aoki told LiveScience. "It's just so overwhelming."

The animals aren't allowed to stay in the human shelters that have been set up, so some pet owners are staying in their crumbling houses with their animals, which in the wake of continued aftershocks can be dangerous.

The Animal Friends Niigata group is also working to help the animals and people left on "Cat Island" – a small island, officially called Tashirojima, with more cats than people. The island survived the tsunami with minimal loss of life after being hit with 20-foot-high (6 meters) waves, Yutaka Hama, of the island's Hama House Inn, said in an email to LiveScience.

While most of the people and animals seem to be OK, there is difficulty in getting supplies to the island and the electricity and water are still off. Helicopters have dropped off human supplies, like gasoline and food, but the pet food situation is unknown. As soon as they can find a boat, Gallaon-Aoki and her team will bring food and water to the community.

"The people on the island are very protective of the cats, so taking them off the island isn't a choice," Gallaon-Aoki said. "We will offer support to give them supplies and help with the injured animals, but a mass evacuation isn't in the cards."

Several groups, including the Humane Society International and World Vets, have pledged monetary support. The Humane Society International is shipping $120,000 worth of supplies and equipment to Japan, Unti told LiveScience. World Vets has also sent a veterinarian to Sendai to help the JEARS teams and Kazumasu Sasaki (a local vet living in one of the hardest-hit areas) administer medicines and care for injured pets.

Visit the JEARS' Facebook page, at www.facebook.com/AnimalRescueJapan, to learn more about their efforts and to donate to their cause. Monetary donations are preferred, though helping hands and homes are needed for rescued pets. "We need help at our shelter right now," said Japan Cat Network's Wybenga. "If they can't come to the shelter we need foster homes. We want to get animals out of the shelter and into homes."

All of these organizations are taking donations, so check their websites for instructions.