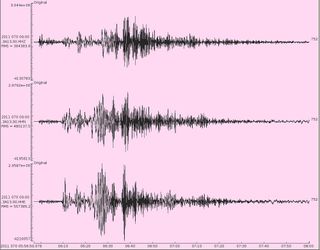 The magnitude 8.9 earthquake east of Honshu on March 11, 2011, as recorded on a SEIS-UK seismometer in the University of Leicester’s Department of Geology. The three traces measure movement of the Earth's surface in the vertical, north-south and east-west direction. SEIS-UK is part of the Natural Environment Research Council’s Geophysical Equipment Facility.
(Image: © David Hawthorn)

An explosion at a nuclear power facility in Japan today (March 12) has blown the roof and walls off a building there, releasing dangerous radiation of unspecified proportions into the air, according to government officials.

The officials doubled the evacuation zone around the Fukushima Daiichi plant, which is about 160 miles (260 kilometers) north of Tokyo and near the epicenter of yesterday's 8.9-magnitude earthquake, from 6 miles to 12 miles. They have advised people within an even larger radius to stay indoors and breathe through wet cloths.

(At the nearby Fukushima Daini nuclear power plant, the evacuation zone has been extended to a 6-mile (10-km) radius from the previous  2 miles, according to the International Atomic Energy Agency.)

The cooling system of nuclear reactor No. 1 at the facility malfunctioned yesterday morning after the 8.9-magnitude earthquake knocked the power out, and an inability to cool down nuclear fuel rods caused a buildup of heat and pressure at the facility. It also drove up radiation to 1,000 times its normal level inside the nuclear reactor's control room.

Officials have not commented on whether the pressure buildup reported yesterday is what caused today's explosion. "We are looking into the cause and the situation and we'll make that public when we have further information," Chief Cabinet Secretary Yukio Edano said at a press briefing.