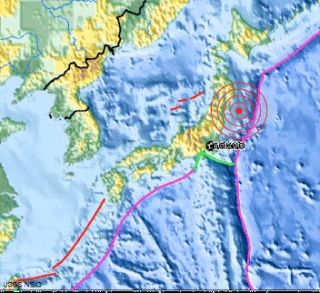 The epicenter of the March 11 earthquake occurred near the east coast of Honshu, Japan.
(Image: © USGS)

The radiation level around a nuclear reactor at the Fukushima nuclear facility near Tokyo has risen to 1,000 times its normal level since this morning's earthquake blew out the plant's cooling system. Technicians at the plant are preparing to release steam that has been vaporized by heat from the nuclear core in order to lower the pressure around the core and prevent a meltdown.

That carries a risk of leaking radiation, too. "It's possible that radioactive material in the reactor vessel could leak outside but the amount is expected to be small and the wind blowing towards the sea will be considered," Chief Cabinet Secretary Yukio Edano told a news conference.

The 8.9-magnitude earthquake that shook Japan early March 11 caused cooling system malfunctions at two nuclear reactors, one at the Tokyo Electric Power Co.'s Fukushima Daiichi power plant near Tokyo and the Tohoku Electric Power Co. facility in Onagawa. Fearing radiation leaks, the government ordered the evacuation of thousands of residents within a 1.8-mile radius of the Fukushima facility this morning.

Eleven reactors nearest the quake's epicenter automatically shut down upon sensing vibrations in the early hours of March 11. "Reactors shut themselves down automatically when something called 'ground acceleration' is registered at a certain point, which is usually quite small. It will instantly drop control rods into the [nuclear] core," Professor Tim Albram, a nuclear fuel engineer at the University of Manchester in the U.K., explained to the press.

Those control rods block neutrons from entering the core and inducing the fission reactions that produce nuclear energy. When the rods drop into the core, the heat put out by the nuclear fuel rods they surround plummets instantly, reducing the core's temperature to less than 5 percent of normal in a matter of seconds.

A base level of heat from nuclear decay continues to flow off the rods, however, and that's the problem in the Fukushima and Onagawa plants. Officials say they do not have enough electric power to pump water through the cooling systems and dissipate the extra heat.

Mark Hibbs, a nuclear expert at the Carnegie Endowment for International Peace, told Reuters that there is serious concern in Japan whether the cooling of the core and removal of residual heat could be assured. "If that does not happen, if heat is not removed, there is a definite danger of a core melt ... fuel will overheat, become damaged and melt down."

"Even if fuel rods melt and the pressure inside the reactor builds up, radiation would not leak as long as the reactor container functions well," Tomoko Murakami, leader of the nuclear energy group at Japan's Institute of Energy Economics, told Reuters. But the pressure can only build up so much before steam must be released, and along with it, some radiation.