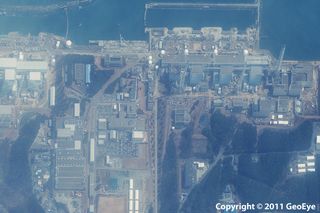 This half-meter resolution satellite image was taken of the Fukushima Daiichi nuclear power plant three days after a 9.0 magnitude earthquake struck the Oshika Peninsula on March 11, 2011.The image was taken by the GeoEye-1 satellite from 423 miles in space as it moved from north to south over Japan at a speed of four miles per second.
(Image: © GeoEye)

In all likelihood, the nuclear crisis playing out in Japan would be far worse if not for a crew of 50 to 100 workers braving explosions, heat and radiation. Little has been written or reported about these unnamed individuals, but their deeds are nothing short of heroic. Here, a look at the conditions they face as they struggle to hold off a catastrophe.

The workers are most likely clad in heavy protective suits with breathing apparatuses, said Michael Murray, a professor of nuclear physics at the University of Kansas. Protection can be uncomfortable. Typically, "all skin is covered, thick gloves, helmets and steel-toed boots. Of course, they all have individual dosimeters," Murray told Life's Little Mysteries, a sister site to LiveScience. "I remember wearing this stuff and it is hot and irritating."

Heat is just one of the problems of working alongside the reactor. News sources have said that the number of workers cycling through the damaged reactor has been increased from 50 to 100, and the Japanese Health Ministry raised the maximum radiation dose for the workers from 100 to 250 millisieverts (mSv).

John Lee, a professor of nuclear engineering at the University of Michigan, said that acceptable levels of radiation are typically much lower — 50 mSv per year — "but this limit may be exceeded somewhat in emergency situations." It should be noted, however, that 250 mSv is not an unreasonable level of radiation. That dose equals 25 rem — another measure of radiation — and it takes a dose of 500 rem to kill a person. Exposure to 25 rem is still a lot under normal circumstances, but under guidelines set by the U.S. Nuclear Regulatory Commission, these workers are not risking their lives.

Kim Kearfott, another professor of nuclear engineering at the University of Michigan, said there are a several radiation checkpoints in place to protect the workers. "When entering areas where one may become contaminated with radionuclides, protective clothing is worn which can be removed. The clothing becomes contaminated, and not the person." The white suits will block most low-energy alpha radiation, but not higher-energy gamma radiation, such as X-rays. To counter that, the workers would need to wear bulky lead shielding or should stand behind objects. Limiting exposure times is also effective.

If high amounts of airborne radioactivity are present, workers may wear respirators, or even carry their own air supplies on their backs like scuba divers. "This prevents the radionuclides from entering the body, where they can remain and continue to expose the workers even after they have left the area," Kearfott said. "There are stationary radiation detectors throughout the plant, as well as portable radiation detectors that can be carried around by workers. There are also walk-through monitors to check for external contamination."

Japan has reportedly been cycling workers through dangerous high-radioactivity areas, which can minimize danger to them. "The shorter the total amount of time at a point with high radiation dose rates, the smaller the dose," Kearfott said. "Often, workers may be rotated through a job. In other words, the job may be completed by 10 workers, so each worker only gets 10 percent of the dose. This would keep worker doses below the thresholds for health effects like acute radiation syndrome."

Long-term health problems may depend on how quickly people are rotated through, Murray said. "The workers who cleaned up after Chernobyl were rotated through fairly quickly and did not seem to suffer many excess cancers. This experience has provided epidemiologists useful data on radiation exposure," he said, adding that the nuclear crisis at the Fukushima plants is not yet on par with the Chernobyl disaster.

Another way to minimize health risks is to send workers in quickly to observe an area, and then scoot back out to plan the next move, according to Kearfott.

Experts say that it's likely the workers continue to perform their dangerous jobs based on a sense of obligation and pride — perhaps even if it's not in their job contract.

"I believe the plant workers are performing heroic, valiant work right now at the Japanese plants, driven by a deep sense of obligation to the society," Lee said. "I believe they perform the duties on a voluntary basis."

Kearfott agreed. "As contracts can be broken, each worker still involved is undoubtedly dedicated to doing their best to help the situation. It is their job, and they are doing it very professionally," she said.

Murray added that his experience working with Japanese scientists left a lasting impression of their strong sense of duty and social cohesion. "These workers probably have already lost loved ones to the earthquake and tsunami, yet they stay," he said.

Stress and lack of sleep may also be playing a role. Although the number of workers was likely increased to reduce the amount of radiation each worker was exposed to, it could also help with the general fatigue and pressure of the situation. Fatigue, said Murray, may be the biggest foe. "They [the workers] are working in very stressful conditions and I imagine that there are many mechanical and electrical issues that they have to deal with while trying to keep water in the reactors and storage pools."

It could be years before lasting effects of these workers' efforts are known, but Japan is a safer country for them.

This article was provided by Life's Little Mysteries, a sister site to LiveScience. Follow Katharine Gammon on Twitter @kategammon.