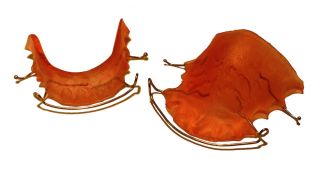 Plenty of people have unpleasant memories of having to fish them out of the middle-school cafeteria trash can, but it turns out mouth retainers may be even grosser than you thought. A new study finds that at least half of the orthodontic devices have potentially dangerous microbes growing on them.

The bacteria found aren't usually dangerous in healthy individuals, the researchers report in the journal Letters in Applied Microbiology, but they can be deadly in people with compromised immune systems.

"With the growing awareness the public has of hospital-acquired infections, it is important to be aware of other potential 'hidden reservoirs' of harmful bacteria, which could be introduced to environments where we know they can cause problems," study author Jonathan Pratten of the University College London Eastman Dental Institute said in a statement.

Pratten and his colleagues took samples from the mouths of retainer-wearers, looking for microbes not normally found in the mouth. They were interested in two potential pathogens, a yeast called Candida, and Staphylococcus, including MRSA, the famous methicillin-resistant strain that doesn't respond to antibiotics.

The researchers found that 66.7 percent of retainers and retainer-wearer mouths contained Candida. About 50 percent contained Staphylococcus.

The microbes live in biofilms, large aggregates of microorganisms stuck to each other and to the retainer surface. Biofilms are difficult to remove once they form, and strength in numbers means the bacteria are resistant to antimicrobial solutions.

The research team is now researching better methods of cleaning. In the meantime, they wrote, hygiene is the best solution: Retainer-wearers should wash their hands before and after handling the retainer, brush the device thoroughly and rinse it with mouthwash.