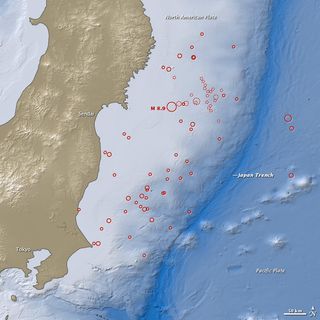 This map shows the location of the March 11 earthquake, as well as the foreshocks (dotted lines), including a 7.2-magnitude event on March 9, and aftershocks (solid lines). The size of each circle represents the magnitude of the associated quake or shock. The map also includes land elevation data from NASA's Shuttle Radar Topography Mission and ocean bathymetry data from the British Oceanographic Data Center. According to the U.S. Geological Survey (USGS), the earthquake occurred at a depth of 15.2 miles (24.4 km) beneath the seafloor.
(Image: © NASA Earth Observatory)

The deadly earthquake that struck Japan last week has been upgraded from an 8.9 to a 9.0-magnitude, the U.S. Geological Survey (USGS) announced today (March 14).

This magnitude places the earthquake as the fourth largest in the world since 1900 and the largest in Japan since modern instrumental recordings began 130 years ago, according to the USGS.

A 9.0-magnitude earthquake is about 1.4 times stronger than an 8.9-magnitude, said Susan Potter, a geophysicist with the USGS.

The USGS often updates an earthquake’s magnitude as more data become available and more time-intensive analysis is performed. Japanese scientists had already upgraded the earthquake from an 8.8 to 9.0. The USGS noted that different agencies use different techniques to measure the magnitude of earthquakes.

The quake triggered a massive tsunami that socked Japan's coast, where the death toll is expected to exceed 10,000, according to news reports.