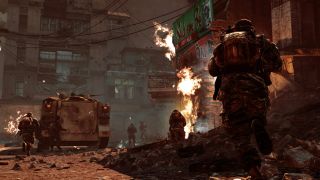 The soldier frantically searched a forest for his rifle as an unknown threat hunted him. When he finally found the weapon and turned to shoot, the trigger felt like it had a 1,000-pound pull and his bullets failed to hit the target. It was a classic nightmare scenario.

But combat dreams don't always go that way. Soldiers who spend long hours playing "hardcore" games such as "Call of Duty: Modern Warfare 2" and "Battlefield: Bad Company 2" seem better able to take control and fight back against aggressive threats and violence in their dreams, according to a preliminary online survey. By contrast, soldiers who did not play video games much suffered from more emotional distress and a frozen sense of helplessness in their dreams.

Past research suggests that frequent video game players, known as gamers, may possess greater awareness and control in dreams, and so researchers have theorized that games might act as a virtual reality rehearsal for the threat simulations found in nightmares. The recent study looked at 98 mentally healthy soldiers and classified them into high gaming and low gaming groups to examine the differences in their dreams.

The high gaming group played military-themed shooter games such as “Call of Duty” and “America's Army,” as well as strategy simulations and massively multiplayer online games such as "World of Warcraft." The low gaming group favored casual games such as the puzzle game "Bejeweled," and did not play daily or weekly like the heavy gamers did.

"The low-end gamers were sadder, angrier and more fearful [in real life]," Gackenbach told InnovationNewsDaily. "That's concerning, but again I controlled for that because it was the gaming I was interested in."

Gackenbach's group coded the dream elements based on a system created by a researcher who had studied nightmares among Vietnam War veterans.

The survey excluded anyone who was suicidal, had addictions or reported symptoms of mental disorders such as post-traumatic stress disorder (PTSD). Still, Gackenbach hopes to someday study the effects of gaming in that population as well, given that nightmares are a classic symptom of PTSD.

Of course, the findings could use more validation from bigger surveys even if all the evidence is "lining up pretty nicely," Gackenbach said. She presented the survey results at the Game Developers Conference held in San Francisco from Feb. 28 to Mar. 4.

But the U.S. military already seems intrigued by the idea of gamelike simulations having somewhat of a protective effect against combat traumas. It has funded work by Albert "Skip" Rizzo, a University of Southern California psychologist, to help create a virtual simulation that could help new recruits mentally prepare for the potential stresses of war.