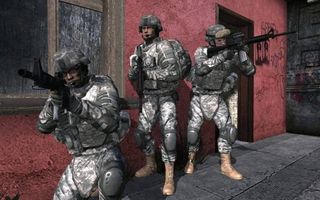 Today's U.S. military recruits enjoy an arsenal of simulators and video games that sharpen their fighting skills and may even protect them from the mental stresses of combat. But experts caution that virtual reality could also help mask the reality of war.

That has not stopped the military from embracing video games to recruit and train a young generation of gamers who typically play commercial games such as "Modern Warfare 2," which passed $1 billion in sales in January.

"The Army has really taken a hold of gaming technology," said Marsha Berry, executive producer for the game "America's Army 3."

"America's Army" represents the official U.S. Army game that competes with commercial offerings such as "Modern Warfare 2" by also featuring online multiplayer shootouts. The free-to-play game has become a more effective recruiting tool for the Army than all other Army advertisements combined, according to MIT researchers.

Such blurring between entertainment and war may have unwanted consequences, according to Peter Singer, a Brookings Institute defense expert. He argues in a Foreign Policy journal article that the "militainment" phenomenon can lead to greater distortions in how people view war.

In real life, "any military person will tell you that there's a blend of incredible intensity and stress combined with long years of boredom," Singer pointed out. "But is a game going to capture that?"

But such reality-based video games could help prepare recruits for the mental horrors of war, help train them for the real thing and even help prevent cases of post-traumatic stress disorder (PTSD) in soldiers. [Related: World of Warcraft Video Game Succeeds in School]

The virtual Army wants you

Very few games have the ambition to convey both the physical carnage and mental anguish of warfare, such as was shown in the recent Oscar-winning film "The Hurt Locker" or HBO's Emmy-nominated World War II series "The Pacific." Instead, they have more narrow goals, such as attracting today's recruits through familiar entertainment.

One Army recruitment station in the Philadelphia area featured war-themed video games and helicopter simulators aimed at attracting urban youth. It closed down last month, but the Army hinted that it might adopt a similar approach for future recruitment stations.

"America's Army" continues a strong run with more than 11 million registered users having played over 260 million total hours and counting since 2002, including enlisted soldiers who play under their real-life unit designations.

"The whole concept behind the game was that it was not going to be about scoring based on kills," Berry told LiveScience. "We wanted it to represent Army values and career options."

Gamers can undergo virtual Army training around barracks and shooting ranges, as well as fight in teams against opposing players in online multiplayer combat. Players who faithfully complete tasks, such as medic training, even get perks in multiplayer games, such as being able to revive wounded comrades during online battles.

The game does have some quirks that reveal how tricky it is to reproduce combat realities on an imaginary platform. In online games, players always view themselves as U.S. Army soldiers and see the opposing team of players as a fictional enemy. By contrast, an upcoming commercial game "Medal of Honor" allows players to fight one another as either U.S. Army or as the Taliban insurgents of Afghanistan.

Killing in "America's Army" also represents a fairly clean affair compared with the bloodier kills of "Modern Warfare 2." That allowed the game to earn a "T for teen" rating, as part of its recruitment tool value.

"We wanted kids to be able to start playing at 13," Berry explained. "If they haven't thought about the Army by the time they get to 17, it's probably not something they'll do."

The recruitment of young gamers has forced some changes in military training. Earlier this year, the Army announced that it would reshape basic training to accommodate a new generation of tech-savvy recruits who may have more gaming skills than physical fitness.

On the upside, specialized games and simulators have become cheap and effective virtual training grounds that supplement the usual physical drills.

The Army trains its soldiers on game-like simulations such as "Virtual Battlespace 2" or even noncommercial versions of "America's Army." Training versions of "America's Army" can integrate real military weapons or hardware with the game software, so soldiers can physically hold the launch tube of a Javelin antitank missile and practice firing it in a virtual setting.

By the time soldiers get to the live fire exercises with weapons, many are already fairly proficient from having trained on the simulators, Berry said.

The most futuristic example of game-like training comes from Raytheon, a giant in the defense industry, and Motion Reality, the company responsible for the 3-D technology behind the Hollywood blockbuster "Avatar."

The two companies developed a free-roaming simulator called VIRTSIM, which allows participants wearing full gear and virtual reality goggles to physically fight their way through a virtual setting. The participants can toss physical objects such as mock grenades that explode in the virtual setting, and even experience a low-level Taser-style shock when a virtual enemy manages to shoot them.

Preparing the mind for war

Such virtual training may go beyond training military recruits to operate weapons, spot roadside bombs, or clear rooms of enemies. It could also protect them from the mental horrors of war, according to Albert "Skip" Rizzo, a University of Southern California psychologist.

With funding from the U.S. military, Rizzo's team in the virtual reality lab at USC's Institute for Creative Technologies wants to prepare military recruits for mental trauma before they are ever deployed overseas. It is developing virtual re-creations based on the stories told by returning veterans.

"What we want to create is something that pulls at the hearts of people," Rizzo said. "Maybe there's a child lying there with the arms blown off, screaming and crying. Maybe your action kills an innocent civilian, or you see a guy next to you get shot in the eye with blood spurting out of his face."

At the most upsetting moment, the simulation would freeze and allow a virtual character to come out and walk the player through the situation. That character might look like a gunnery sergeant, a Buddhist monk, even a former schoolteacher – whatever helps the recruit think calmly after experiencing the virtual trauma.

Such stress-resilience training, or emotional coping, has existed in U.S. military training for a couple of years. But there's a limit to how much time new recruits can spend in workshops or in the re-creation of an Iraqi village at the Marine Corps Base Camp Pendleton in Southern California. A virtual simulation or game could allow more recruits to train themselves in stress resilience during the many months leading up to actual combat.

Less is more for veterans

Ideally, the preparation would help prevent future cases of PTSD among veterans. As many as 20 percent of returning military personnel may suffer from the disorder or from major depression, according to a 2008 study by the RAND Corp.

For veterans with PTSD, even poor graphics in virtual reality simulators can trigger powerful memories. Psychologists have found that a crude visual representation allows the mind of the patient to fill in the details based on personal experience (similar to the notion popularized in the Hollywood blockbuster "Inception").

"If you leave it a little bit open, then you have more space for the patient's own imagination and their own insertion of experiences in the world," Rizzo said.

When Vietnam War veterans took part in virtual reality therapy for PTSD during the late 1990s, the simulation graphics "sucked," according to Rizzo.

Even so, "when the patients got out of the [virtual] copter, a couple of them were describing Vietcong shooting from the jungle and water buffaloes in the rice paddies. None of that was in the simulation – they had blended in their own experiences."

Rizzo hopes that the new stress-resilience training can trump the need for PTSD therapy and allow future military veterans to return to civilian life with fewer nightmares. He wants to convey a sense of reality closer to certain war films, such as "Platoon" or "Saving Private Ryan," rather than the films he watched as a kid, in which combat appeared as a sanitized black-and-white struggle.

"We're training people to cope with the jobs they've been asked to perform and come back intact," Rizzo said. "Nobody goes to war and comes back the same, but when they return, are they capable of holding a job and loving their wife and kids? That's what our aim is, to make the return home as smooth as possible."

Before that can happen, Rizzo and his colleagues must figure out how to strike a balance in the realism of their simulations. Too polished a presentation may lull recruits into thinking of the simulation as just another commercial game such as "Modern Warfare 2," where death only has the consequence of making players wait to reappear in the next match.

"We don't want it to look like a game [recruits] have already played and become habituated to," Rizzo said.

Brookings Institute defense expert, Singer wondered if militainment could also lead to a growing sense of detachment among military recruits during actual combat. He spoke with military officers who observed as much about some of the latest recruits.

"This might be the essence of this new era of militainment: a greater fidelity to detail, but perhaps a greater distortion in the end," Singer wrote in his Foreign Policy article.

That distortion could become magnified among the majority of gamers playing "America's Army" or "Modern Warfare 2," who only experience warfare as what appears on their computer and television screens. Few will end up deploying overseas to experience the reality of war in places such as Afghanistan for themselves, according to Singer.

"This is especially the case as you have now almost two generations (X and Millennials) for whom the draft is just some paper card you get when you are 18 and never ever hear about again," Singer said in an e-mail. "It completely changes the way they think about war."

The militainment trend also takes place during a time when those killed in the wear rarely show up in U.S. news, and only arrive home as flag-draped coffins.  As a result, most gamers may only ever see the casualties of modern wars as pixels on a screen – there one moment, gone the next.