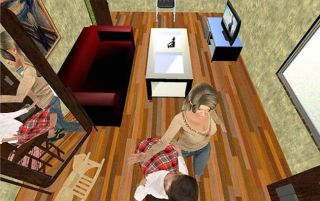 Male volunteers reacted strongly to a virtual slap given to their girl avatar.

Many video gamers know the shock of seeing their game avatar get shot or injured, and so a virtual slap sounds almost tame by comparison. But scientists have now shown how humans can inhabit a virtual body so completely that their real bodies react to a virtual blow as if someone had slapped them in real life.

In the study released this week, male volunteers donned virtual reality goggles and took on the view of a virtual teenage girl sitting in a living room.  The virtual girl's mother appeared to stroke her shoulder at the same time a real lab assistant stroked the shoulders of the volunteers.

Suddenly, the virtual mother slapped her daughter about the face three times with accompanying sound effects. The male volunteers all experienced a strong bodily reaction measured as rapid deceleration and then acceleration of their heart rates in response to the sudden threat, because they reacted to the virtual slap as if it were real.

"The experiment reported here is the first that shows that ownership can be transferred to an entirely virtual body, using an experimental design that separates perspective position from visuotactile stimulation," European researchers reported in the journal PLoS One.

They showed that a first-person perspective seems to play the biggest role in helping people inhabit a virtual body. When participants had more of a third-person perspective of the girl-slap (they didn't feel like they inhabited the girl's body), they didn't show the same physiological reactions.

The participants who showed the greatest slowing of the heart rate during the barrage of virtual slaps also reported having a stronger feeling of body ownership and the feeling of being attacked or hurt. The drop and then rise in heart rate happened in just five seconds.

"The idea of heart rate deceleration is that after a disturbing event, the heart rate first descends and then rises again," said Mel Slater, a computer scientist at the University College London in London and lead author on the study.

In past studies researchers have been able to give people the illusion of swapping bodies with a human or even humanoid based on just touch alone. Virtual reality has also enabled even more sophisticated out-of-body experiments.

But this latest study also marks the first time that researchers have tested three factors together, including perspective, movement and touch.

The first-person perspective's power held even after the perspective changed to a top-down view. Male volunteers still experienced the shock of the virtual slap even when they no longer felt the shoulder stroking by the real-life lab assistant and watched from above as the mother suddenly slapped her daughter. That's as good an out-of-body experience as it gets.