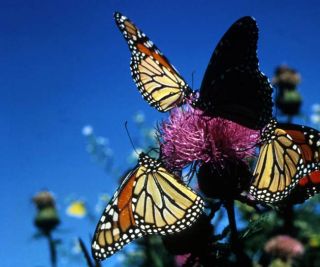 The fight for survival, both beautiful and grim: 'It's very dramatic when they're returning,' said insect ecologist Chip Taylor. 'They just reproduce until they die, crawling from plant to plant to lay the last eggs.' Female monarchs lay about 400 eggs each. Only one or two will make it to adulthood.
(Image: © USFWS.)

Monarch butterflies have begun their annual transcontinental journey north from their wintering grounds in Mexico, and butterfly enthusiasts in the southern United States are keeping their eyes peeled for the season's first flash of brilliant orange and black.

Already a few colorful visitors have been spotted in California, Florida and Texas, and spring's colorful onslaught is set to be a good one compared to last year's dismal monarch showing.

Monarch butterflies spend the winter in the pine forests of Michoacán, in western central Mexico, festooning the trees by the millions and barely moving for months.

During the 2009 to 2010 season, the resting butterflies covered a mere 206,670 square feet (19,200 square meters) of forest — an area only about one-eighth larger than the average Walmart Supercenter store.

"That was an all-time low," Taylor told OurAmazingPlanet, "and then we had a whole series of winter storms that just knocked the daylights out of the population." It's difficult to pin down exact numbers, but Taylor estimates the monarch butterfly population was slashed in half.

Thanks to favorable breeding conditions in 2010, the population that returned to Mexico last fall was twice as large as the generation that left in the spring, setting the stage for a grand butterfly entrance this year.

All eyes on Texas

However, a strong initial showing doesn't mean the monarchs will thrive.

"Even though there are more butterflies coming back, that doesn't necessarily mean the population is going to take off," Taylor said. "Texas sets the stage, it always does, in terms of what the butterflies do from year to year."

Texas, and specifically its milkweed plants, which the butterflies feed on, are where the first post-winter generation is born, and temperature and moisture conditions, even the abundance of fire ants — "nasty little things," said Taylor — in the southern state can make or break the monarch population.

Right now, Taylor said, it's hard to tell how the first round of butterflies will fare.

It takes the butterflies about four generations — four cycles of mating, egg-laying and hatching — to reach the northern extent of their migration in the upper United States and Canada.

There, ahead of the approaching autumn weather, a bizarrely long-lived "super generation" is hatched and makes the long flight all the way back to the forests of Mexico to live out the colder months in a quiet stupor, clinging to the trees before heading for Texas to mate and lay eggs come springtime.

Although no monarchs have yet appeared this spring in College Station, Texas, Craig Wilson, a senior research associate at Texas A&M University's Center for Mathematics and Science Education, said he's expecting to see the butterflies in the garden outside his office window soon.

Wilson, a butterfly enthusiast, brings local school groups to the campus's gardens to help tag the insects as part of a tracking program run by Taylor's Monarch Watch.

Last October, kids tagged monarchs heading back to Mexico, and Wilson said that — although he knows the chances are almost zero — it would be amazing if a butterfly tagged at A&M last year managed a return trip to the school's gardens.

"In theory that might happen," Wilson said, "which makes it a little more intriguing."

However, Wilson said one of the best things about observing the delicate insects is watching them literally turn into a butterfly before your eyes.

"You can read about it in a book, and you can see a picture, but when you actually see it there happening, you sort of marvel in disbelief," Wilson said. "It's a magical moment to see it emerge."

Monarch numbers have been declining for the last seven years. Taylor said it should be clear in about five weeks how this year's population will fare.

This article was provided by OurAmazingPlanet, a sister site to LiveScience. Reach Andrea Mustain at amustain@techmedianetwork.com. Follow her on Twitter @AndreaMustain.