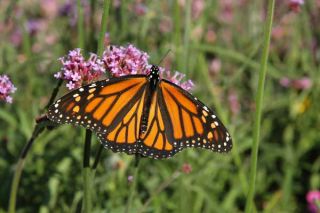 A monarch butterfly. Scientists can track down its birthplace by analyzing chemical signatures in its wings.
(Image: © Donald Davis.)

Monarch butterflies use medicinal plants to treat their offspring for disease, before they even hatch, a new study finds.

Monarch caterpillars feed on any of dozens of species of milkweed plants, including some species that contain high levels of a group of chemicals callled cardenolides. These chemicals do not harm the caterpillars, but make them toxic to predators even after they emerge as adults from their chrysalises.

As caterpillars, the monarchs are susceptible to gut invasions by parasites, which persist when the caterpillars become adults. An infected female passes on the parasites when she lays her eggs.

"Several years ago we did experiments in which we reared monarch caterpillars on two different species of milkweed, and found that tropical milkweed reduced parasite infection, parasite growth and the disease suffered by the monarchs, " said Jaap de Roode, an evolutionary biologist at Emory University in Atlanta. "I then wondered if monarchs could take advantage of this, by preferentially using the tropical milkweed if they were infected."

De Roode and his fellow researchers created an experiment in which they raised monarchs and bred them in the lab. When new butterflies were born, some were infected with the parasites.

As for the next step in the research, De Roode plans to work with a wider variety of milkweed and butterflies.

"We are studying monarchs from different areas of the world, where they encounter different species of milkweed, to investigate whether this medication is a general phenomenon," said De Roode. "For example, if there are other species in different parts of the world, can the monarchs distinguish between these as well and preferentially lay their eggs on medicinal species when they are infected?"

De Roode added, "You look at these creatures that we think are very simple, and they can do this fantastic thing. They look at nature as a medicine cabinet. Other organisms learn to do this from their parents, but monarchs don't learn self medication, they do it innately."