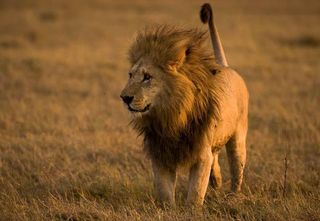 Wildlife groups are taking a roundabout approach to protect Africa's iconic lions. They want the big cats listed as endangered in the United States.

Wildlife groups filed a petition with the Department of Interior yesterday (March 1) seeking protection for African lions in the United States under the Endangered Species Act. The move is needed to stop the import of lion parts that were hunted as trophies, the groups said in a statement.

The population and range of the African lion are in alarming decline. Over the past two decades, the number of African lions has been cut almost in half by retaliatory killings, loss of habitat and prey species, exploitation by recreational trophy hunters and commercial trade, disease, and other factors.

Fewer than 40,000 African lions remain, most of them in just a handful of countries. Two-thirds of the remaining populations are unprotected.

"There is a real possibility that more African countries will lose their wild lions altogether if the current situation is not reversed," Adam Roberts of the wildlife group Born Free USA said in a statement. "Currently, lions are not adequately protected by existing regulatory measures at national, regional or international levels."

The petition documents how international trade in African lions and their parts is playing a role in the reduction of the population. From 1998 through 2008, at least 7,445 wild lions were traded internationally, and at least 4,021 of them were brought to the United States, including more than 3,600 for recreational trophy hunting purposes.

"The king of the jungle is heading toward extinction, and yet Americans continue to kill lions for sport," said Jeff Flocken of the International Fund for Animal Welfare. "Our nation is responsible for importing over half of all lions brought home by trophy hunters each year. The African lion is in real trouble, and it is time for this senseless killing and unsustainable practice to stop."

"The United States is the leading importer of lions and lion parts for commercial and recreational trade — this includes skulls, claws, hides and live lions," said Teresa Telecky of the Humane Society of the United States. "Americans' thirst for exotic goods and trophies to hang on their walls is driving lions to extinction."

The secretary of the interior has 90 days to assess whether an endangered listing under the ESA may be warranted, 12 months to decide whether to propose listing and another 12 months to make a final decision.