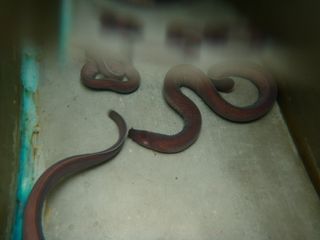 Hagfish have guts, but they also absorb nutrients through their skin and gills.
(Image: © Andrea Morash)

Hagfish are simple, tubelike scavengers with gruesome feeding habits: When the ugly predator encounters a carcass on the seafloor, it burrows into the body cavity of the dead or dying animal. There it eats, not only with its mouth, but also with its skin and gills.

That's right — a new study has shown that hagfish can absorb nutrients through their skin and gills. And once inside a carcass, the hagfish is surrounded by a high concentration of dissolved nutrients.

Some invertebrates, including mollusks and worms, are also known to absorb nutrients through their skin or gills. But until now, no vertebrates — animals with bony skeletons like us — were known to feed themselves this way.

Hagfish are ancient — in fact, they are believed to be the oldest living connection to the first vertebrate. And their system for taking up nutrients represents a transition between that used by aquatic invertebrates such as worms and the more specialized digestive systems used by vertebrates like us, the researchers write in the current issue of the journal the Proceedings of the Royal Society B: Biological Sciences.

Their bodies, too, are simple, resembling tubes. Hagfish are also largely blind.

"Their most striking feature, besides the ability to exude thick, gel-like slime in copious amounts when disturbed, is the whisker-like appendages around their mouths that they use to explore the environment," study researcher Carol Bucking, of the University of British Columbia and Bamfield Marine Sciences Center in Canada, wrote in an e-mail to LiveScience.

Using skin and gill tissue taken from hagfish caught near Vancouver Island in Canada, the researchers tested the tissues' absorption of two amino acids, which are the building blocks of proteins.

"We wanted to start with a simple dissolved organic nutrient, and given the fact that the food source is a large decaying pile of protein, an amino acid seemed to be the best place to start," said lead researcher Chris Glover, of the University of Canterbury in New Zealand and Bamfield Marine Sciences Center.

Their results indicated that specific molecular mechanisms exist within the hagfish tissues to move these amino acids into their bodies. For instance, the researchers found that increasing the concentration of an amino acid caused the tissues to increase absorption, but only up to a point. If a specific transport mechanism is moving the molecules, then all of the absorption sites along the skin and gill tissue can become occupied, maxing out the absorption of the amino acid, according to Glover.

The better to eat you with

While some organisms exchange nutrients with the water around them as a way to maintain their body fluid salt concentrations, hagfish likely transport molecules through their skin and gills exclusively as a source of nutrition, Glover said.

This additional ability to absorb nutrients may be an adaptation to help hagfish make the most of infrequent meals on carcasses that also attract other hungry scavengers, he wrote in an e-mail.

Although very little is known about the hagfish's simple digestive system, the new study indicates it doesn't have a corner on nutrition when compared with the skin and gills.

"A quick and simple calculation suggests that the skin in particular may be capable of absorbing nutrients at levels equivalent to that of the digestive tract!" Glover wrote.