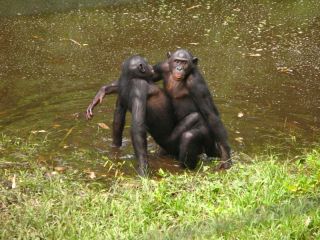 The cries one calls out during sex can serve as status symbols advertising just how popular your partners are, according to new findings in the sexually promiscuous chimpanzees known as bonobos.

Just like humans, sex is not used simply for reproduction among bonobos, but now also serves as a social tool, researchers added.

Bonobos, once known as pygmy chimpanzees, are the sister species of common chimpanzees, and with them are the closest living relatives to humans. These endangered apes are legendary for how sexual they are, frequently engaging in close encounters with members of both the same and opposite sexes.

"Despite being our closest living relatives, bonobos are still one of the least understood of the great apes, whom we still know very little about," said researcher Zanna Clay, a primatologist at the University of St. Andrews in Scotland. "This study sheds light on one of the most neglected aspects of their behavior, their vocal communication."

During sex, female bonobos cry out loudly. Females in many primate species give out "copulation calls" that are typically seen as ways of showing off how successful they are at sex, perhaps to attract more mates and improve their chances of having offspring.

However, female bonobos give out these calls even when having sex with other females, whom they cannot have offspring with. Now scientists are finding that just as bonobos often copulate for reasons having nothing to do with reproduction — much as humans do — so too can these calls serve a broader social role beyond just breeding. [Top 50 Reasons Humans Have Sex]

"The rain was really annoying as the bonobos run off up the tree and hid, so even if they were having sex, I couldn't see it or record the calls," Clay said. "Sometimes, when they were eating food in a large group, there was so much sex going on between every age and sex combination, it was hard to keep up with who was having sex with who!"

After a year of study, Clay and her colleagues found that during same-sex mating, the lower-ranking partner always made the copulation calls. At the same time, among these lower-ranking individuals, the chances of crying out generally increased with the partner's social rank, regardless of whether that partner was male or female. In this way, the apes are advertising they might be "in" with Mr. or Ms. Popular.

"Female bonobos achieve power by forming coalitions with other females as well as males, so getting powerful female friends, and advertising it, matters," Clay told LiveScience. "Like humans, sex among bonobos is not only used for reproduction, it is also important in other ways, such as friendship and bonding, and keeping close to powerful others."

Future research can analyze whether these calls are indeed meaningful to listeners.

"Generally though, much more research on bonobo behavior and communication is required," Clay said. "Bonobos are extremely endangered and threatened by extinction, as they are endemic only to the Democratic Republic of Congo, a country ravaged by war and instability. The political instability and poor logistics of the Democratic Republic of Congo, as well as the forest's epic remoteness, mean that research on bonobos still remains a great challenge."

The scientists detailed their findings online Feb. 16 in the journal Biology Letters.