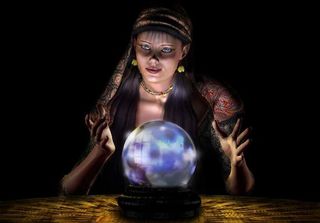 Psychics and witches in Romania, a country historically known for superstitions and vampire beliefs, are upset over a new law that would fine or imprison them for making incorrect predictions. Romania, like many other countries in Europe and around the world, is in the midst of a severe economic crisis, and the law is seen as a way to raise money for government expenditures.

In an interesting twist, the psychics seemed to acknowledge that their predictions were often wrong but blamed their incompetence on divination tools such as Tarot cards and crystal balls. "They can't condemn witches, they should condemn the cards," prominent psychic Bratara Buzea told The Associated Press.

If the law is enacted, it could lead to a class-action lawsuit against manufacturers of Ouija boards, Tarot cards, crystal balls, runestones, and tea leaves for selling defective products. Like all manufacturers, they should be able to demonstrate that their products are safe and effective for their intended purpose: telling the future or imparting mystical wisdom.

One of the most damaging pieces of evidence against the existence of psychic powers (whether alone or aided by Tarot cards or other tools) is that information supposedly gleaned from psychic powers is not only incorrect but is usually contradictory. A dozen different psychics will give a dozen different readings to the same person; the fault lies with the psychics, not with the tools they use.

If the practice of holding psychics accountable for the accuracy of their information spreads to other countries, American psychics have reason to worry. Psychic detectives in particular—those who claim to find missing persons and assist police investigations—have a long and consistent track record of failure (despite claims to the contrary). Since psychic information wastes police time and resources (and therefore taxpayer dollars), a strong argument could be made for fining psychics for information they provide that turns out to be useless or incorrect. This would not, of course, be a problem for any real psychics out there.

Bratara also said that the proposed Romanian law is unfair because there's no way for a psychic to know if clients provide accurate information about themselves to the psychic.