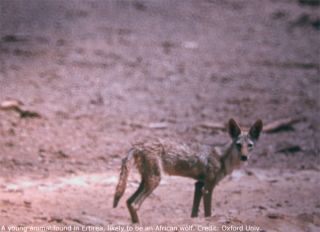 A young animal found in Ertirea, likely to be an African wolf, a subspecies of the grey wolf and long thought to be a type of golden jackal before new genetic findings.
(Image: © Oxford University.)

During a field expedition to Ethiopia, a team of scientists noticed something odd: The golden jackals there looked more slender with a whiter coat than they do elsewhere. Now, genetic analyses suggest these oddities are not jackals at all but instead more closely related to gray wolves.

In fact, until now these "highland jackals" were referred to as Egyptian jackals (Canis aureus lupaster), and had long been considered a rare subspecies to the golden jackal (C. aureus).

With new genetic evidence in hand, the team suggested the animal be called the African wolf to reflect its true identity.

"It seems as if the Egyptian jackal is urgently set for a name change," said study researcher Claudio Sillero of Oxford University's Wildlife Conservation Research Unit (WildCRU). "And its unique status as the only member of the gray wolf complex in Africa suggests that it should be re-named 'the African wolf,’" said Sillero, who has worked in Ethiopia for more than two decades.

(The gray wolf population extends to the Sinai Peninsula but doesn't exist on mainland Africa.)

"We originally set out to study the jackals in Northern Ethiopia, and discovered this new species by chance through the genetic analyses," said study team member Nils Christian Stenseth, a research professor and chairman of the Center for Ecological and Evolutionary Synthesis at the University of Oslo in Norway.

Stenseth, Sillero and their colleagues, including scientists from Addis Ababa University in Ethiopia, analyzed the DNA from the feces of five individuals of the mysterious animal, one of which they had filmed defecating so they could link for certain this creature with its DNA sample. They got another tissue sample, for DNA analysis, from a road kill in Arsi in southeast Ethiopia. And DNA samples were also obtained from golden jackals in Serbia.

The DNA comparisons showed C. a. lupaster is more similar to the gray wolves than to golden jackals.

The work also suggested gray wolves reached Africa around 3 million years ago before spreading throughout the Northern Hemisphere.

"Our findings suggest that the colonization of Africa by the ancestral stock of gray wolves took place about 3 million years ago and is today embodied in the animal that has hitherto been called the Egyptian jackal," Stenseth told LiveScience.

The new wolf is a relative of the Holarctic gray wolf, which lives in northern Europe and northern Asia, the Indian wolf and the Himalayan wolf.

The findings add to our knowledge about the so-called Afroalpine fauna, an assemblage of species with African and Eurasian ancestry that evolved in the relative isolation of the highlands of the Horn of Africa.

"A wolf in Africa is not only important conservation news, but raises fascinating biological questions about how the new African wolf evolved and lived alongside not only the real golden jackals but also the vanishingly rare Ethiopian wolf, which is a very different species with which the new discovery should not be confused," said study team member David Macdonald, director of Oxford University's WildCRU.

Rare Ethiopian wolves split off from the gray wolves even earlier than the newly discovered African wolf.

Currently, the golden jackal is listed as a species of least concern by the International Union for Conservation of Nature (IUCN), which means the animal doesn't fit into any of the "endangered" or "threatened" categories.

"In Ethiopia, the golden jackals, which presently includes the cryptic African wolves, are systematically persecuted because of their threat to livestock," the researchers write. Even so and even though the Egyptian jackal is supposedly extremely rare, it is not protected, they add.

To get an idea of the true population numbers and distribution, the team said a thorough survey is needed in both Ethiopia and adjacent countries. Stenseth and his colleagues hope to continue their research with a study of the animal's ecology – how it interacts with other animals and its environment.