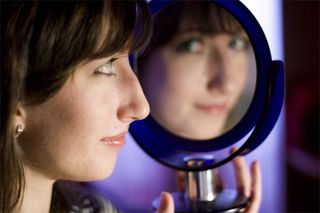 So he failed to hold the door for you — he's a teen, what do you expect? Scientists and the average adult have known young adolescents to be selfish. With brain-scanning technology, researchers are now figuring out how most of these "delinquents" transform into respectable adults.

A study involving a trust game revealed that 12- to 14-year-olds use a part of their brain linked to self-oriented thought and what's-in-it-for-me thinking when they make decisions about whether to share with others. Older teens and young adults use this "me" part of their brain when acting selfishly; for pro-social decisions, their brains charge up an area linked to taking others' perspectives into consideration, the researchers found.

The findings, detailed in the January 2011 issue of the journal Psychological Science, suggest these brain changes underlie the behavioral transformations as teenagers grow up. [7 Ways the Mind and Body Change With Age]

Sixty-two paid volunteers (about evenly split between male and female) played the trust game inside a functional magnetic resonance imaging machine (fMRI), which measures blood flow to different areas of the brain as a way to pinpoint brain activity.

In the trust game, one of the players (Player 1) can either share a certain amount of money equally with another player or giving the entire sum to that player. If Player 1 divides the money equally, the game ends. But if Player 1 does give it all to the other player, the amount of money increases and at this point Player 2 has the choice to share that amount with Player 1 or keep most of the money (called defecting).

The researchers, including Wouter van den Bos of Leiden University in the Netherlands, put study participants in the role of Player 2, telling them that Player 1 had already made their decisions in a prior round of the game. Participants were also told they would be rewarded financially for their trust-game decisions.

Some of the trials were considered low-risk, in which participants were told Player 1 had given them only a small sum (and as such did not stand to lose much if they did not reciprocate). Higher-risk trials were the ones in which Player 1 provided a large sum of money.

On average, participants reciprocated in about half of the trials, but the results varied by age group.

The mid-adolescents and young adults showed more reciprocity during the high-risk trials than during the low-risk ones. To the researchers, the difference hinted that the older age groups "got it" — that they were thinking along the lines of, "Oh, Player 1 is really putting himself out for me and trusted that I'd reciprocate."

The youngest adolescent group showed no difference between the low- and high-risk trials. "They were always just thinking more about their own outcomes," Van den Bos told LiveScience.

The brain results paralleled the behavior findings. When acting selfishly (defecting), all age groups showed similar brain activity in the medial prefrontal cortex, a region involved in self-oriented thought. However, brain activity in the "self" region did not show up during reciprocation for mid-adolescents and young adults, while it did for younger teens.

"An interesting avenue for future researchers is to test the hypothesis that even when reciprocating, young adolescents are engaged in self-referential thoughts," the researchers wrote.

In addition, activity in the brain's temporo-parietal junction (TPJ) increased with age. This area, where the temporal lobe (just above your ear) and parietal lobe (toward the back of your head) meet, is thought to be important for shifting attention between one's own and other perspectives and for inferring the intentions of others, the researchers wrote.

The change in activity with age suggests a shift in attention from self to others during adolescence, the researchers said.

The research was supported by a Vidi grant from the Netherlands Organization for Scientific Research.