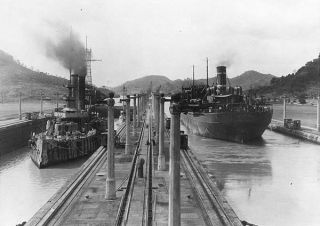 February, 1923: Ships pass through the Pedro Miguel Lock, less than a decade after the canal's completion. The canal is now being expanded to accommodate today's mega-ships. Although new construction is built to withstand seismic shrugs, some researchers wonder if the older locks can withstand a beating from a major earthquake.
(Image: © U.S. Naval Historical Center.)

Panama's capital city and its iconic canal could be at risk for a major earthquake, according to new research.

Geologists have discovered that two fault lines, one of which cuts directly beneath the Panama Canal, are capable of powerful ruptures.

The canal is undergoing a major expansion project, scheduled for completion in 2014, in time for the waterway's 100th anniversary. According to some estimates, more than 73 percent of the cargo ships in use today are too large to squeeze through the narrow canal.

Authorities in charge of the expansion commissioned the recent research to uncover any seismic risks posed to the new construction.

Panama lies on a narrow isthmus perched atop two colliding tectonic plates — the Central American and South American — and although the country has experienced earthquakes in the past, the two faults the scientists are targeting have lain dormant for decades, even centuries.

"I think to some degree we were all surprised that these faults were as active as they are," said Thomas K. Rockwell, a professor of geology at San Diego State University and lead author on the new study.

The Pedro Miguel fault, which travels underneath the Panama Canal, last ruptured in 1621 — a time for which detailed earthquake records are scarce.

Rockwell and his team traveled deep into Panama's rainforests in search of more data on the historic quake, and discovered that the temblor displaced the Camino de Cruces, an old Spanish thoroughfare once choked with prospectors and donkeys hauling loads of South American gold. The earthquake shoved the well-trod cobblestone highway more than 9 feet (3 meters) off its original mark.

The finding added to the mounting geological evidence that the Pedro Miguel fault is capable of powerful, devastating movements.

Although the fault does pass beneath the Panama Canal, Rockwell said that fortunately it doesn't lie directly beneath any of the canal's locks, the massive, dam-like chambers that allow ships to pass between the Pacific and Atlantic Oceans.

Rockwell said if the Pedro Miguel fault experienced an earthquake similar to the 1621 rupture today, it could cause major damage in nearby Panama City, particularly since construction codes may not be up to the standards required to hold up in a major earthquake.

As to whether the danger is imminent, Rockwell remained circumspect.

"On the Pedro Miguel fault, we've had three large earthquakes in the last 1,600 years. The last earthquake was in 1621, so it's been almost 400 years," Rockwell told OurAmazingPlanet.

"I’m not going to make any predictions."