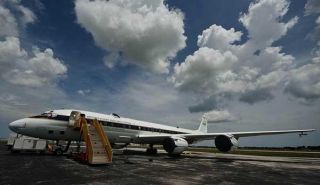 NASA's DC-8 plane, the largest of several aircraft flying into hurricanes this season. The plane is outfitted with multiple instruments to gather data on storm formation.
(Image: © NASA/Paul E. Alers.)

This week, NASA conducted the first of many flights slated to soar near,through and above tropical storms in the Gulf of Mexico during the 2010 hurricane season.

The inaugural voyage was part of the Genesis and Rapid Intensification Processes mission, or GRIP experiment. The study aims to unlock the secrets of storms like Hurricane Katrina that swiftly escalate — sometimes with devastating consequences.

"We want to look at storms that go from a Category 1 storm up to a Category 5 stormin a short period of time — what are the key processes that allow thatto happen?" said Scott Braun, one of the mission scientists and a research meteorologist at NASA's Goddard Space Flight Center in Greenbelt, Md.

The Tuesday flight, out of Ft. Lauderdale, Fla., lasted eight hours. ADC-8, the largest of GRIP's multi-plane fleet, sampled the air within afrontal system that was developing over the Gulf of Mexico. Although the front didn't intensify as researchers hoped, Braun said the team wasable to gather other valuable information.

The DC-8 made a slow, spiraling dive down through the clouds and backup again, allowing instruments aboard the plane to collect data on precipitation and even glean information about individual raindrops and snowflakes.

The Tuesday flight was coordinated to coincide with two NASA satellite flyovers, allowing the plane and the satellites to examine thesame patch of weather simultaneously. The data will help scientists to fine-tune the complex algorithms and models required for modern-day meteorological work.

Because Hurricane Danielle— now about 700 miles (1,130 kilometers) south of Bermuda — is a little out of reach of GRIP's aircraft, Braun said the team is heading to St. Croix this weekend, where he hopes the DC-8 will get its first taste of a real hurricane, if Mother Nature cooperates.

Tropical Storm Earl, which is just a couple miles east of the Northern Leeward islands, is forecasted to become a Category 1 or 2 hurricane by Saturday, and Braun said, if all goes well, the plane will fly through the storm on Sunday.

Earl is of particular interest because its conditions are perfectly suited to help settle one of meteorology's big controversies about how winds coming off the coast of Africa affect hurricane development in theAtlantic. Satellites reveal that Earl is surrounded by Saharan air — hot, dusty winds that travel from Africa across the Atlantic Ocean.

There are two camps when it comes to understanding what part these scorching dessert winds play in storm formation, Braun said. Some believe the Saharan air can have a powerful, lulling influence on a storm system, while other scientists think the dry, dusty air is a mere bit player.

"For some, the Saharan air is everything," Braun told OurAmazingPlanet. "This is a chance for us to really understand what effect it does have."

Right now, Braun is planning at least eight passes through Earl, and is coordinating the DC-8's path with that of a National Oceanic and Atmospheric Administration (NOAA) plane also scheduled to fly through the storm.

Braun will be aboard the aircraft for the 10-hour flight through the heart of the would-be hurricane.

"The pilots will avoid anything that looks too severe," Braun said. "They're very good about keeping us safe."

NASA's Global Hawk planewill also head out this weekend, but to the Pacific, where, if Hurricane Frank cooperates, the unmanned drone will conduct flyovers of that storm, just off the western coast of Mexico.