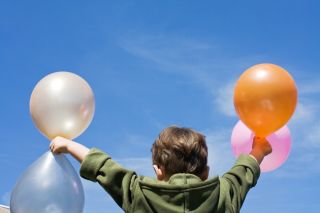 A helium shortage means that helium balloons should cost about $100 each.
(Image: © Puma330 | Dreamstime.com)

Expensive party balloons of the future represent just the tip of the problem in a world that faces a looming helium shortage, according to a Nobel Prize Laureate. Globally, prices have more than doubled in recent years.

Robert Richardson, a physicist at Cornell University, told New Scientist last week that balloons  should cost around $100 apiece based on the current helium supply. He also predicted that the supply would run out within about 25 years.

But an artificial cap on the price of the U.S. government-owned helium supply means that the price has still not risen accordingly along with skyrocketing demand.

Helium has special characteristics that include the lowest melting and boiling points of any element. As such, it has become a favored choice for chilling high-energy accelerators (atom smashers) and high-field magnets used in medical devices, such as MRI scanners – a cryogenic application that makes up 28 percent of the total helium use in the United States.

The element's ability to remain liquid at frigid temperatures also makes it ideal for purging and pressurizing rocket tanks and propulsion systems. NASA and the U.S. Department of Defense both use large amounts of helium for space exploration and defense systems, which make up another 26 percent of U.S. helium use.

Another 13 percent of U.S. helium use goes toward supporting the manufacture of fiber optics and semiconductors, which form the backbone of the digital age.

The United States built up a Federal Helium Reserve during the Cold War by purchasing helium from private companies, and encouraged companies to develop helium extraction and refining facilities so that they could sell to the federal government. But it halted purchases of helium in the 1970s because of a massive surplus compared with the relatively low amount of helium being used at the time.

Now the stored helium sells at a federally mandated price set in the Helium Privatization Act of 1996, which aimed to sell off all the reserve helium by 2015 – equivalent to half of the world's helium stock.

The selloff comes at a time when demand for helium has surged outside the United States since 2000, and retail prices for helium have more than doubled between 2003 and 2008. That means the helium reserve now sells at an artificially low price compared with market demand.

The U.S. government should reconsider its 1996 policy, according to a National Academy of Sciences report that came out in January. Richardson co-chaired the report along with Charles Groat, a geologist at the University of Texas at Austin.

Helium may represent the second-most-abundant element in the universe, but existing technology cannot harvest the low amounts of helium from the Earth's atmosphere at economically reasonable prices. The current supply relies upon helium extracted from the same rock that traps natural gas.

Rather than sell off the entire helium reserve, the federal government might consider keeping a strategic supply for a future world where helium looks increasingly scarce, the report said.

"If this path continues to be followed, within the next ten to fifteen years the United States will become a net importer of helium whose principal foreign sources of helium will be in the Middle East and Russia," Richardson and Groat stated during testimony before Congress in May.