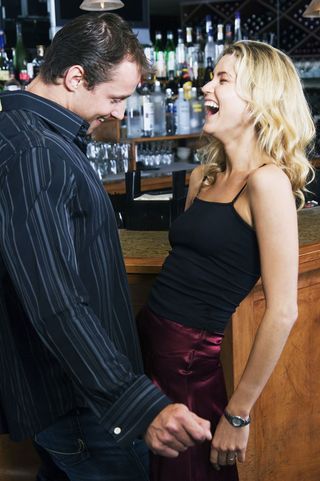 A new study indicates who is more likely to be promiscuous based on their personality type.

Whether your flirting style is playful or more traditional says a lot about your personality and could even help snag a date or get through a tough patch in a relationship, suggests a new study.

The research revealed five flirting styles people use when communicating with romantic others – playful, traditional, physical, sincere and polite. Each approach leads to different experiences in the flirting world, with "polite" women saying they don't find getting hit on particularly flattering and that they have trouble getting guys to notice them.

"People often find themselves frustrated or unhappy with their ability to get others to notice them, for others to find them interesting, and for others to know they are interested in romance — not friendship or just a short-term hook-up," study researcher Jeffrey Hall, assistant professor of communication studies at the University of Kansas, told LiveScience.

"If we know more about what we do, and the likely outcomes of each style, then it may give us insight into why we end up where we do. It might help people emphasize different parts of their style to change their approach to romance," he said, adding that most people are a mix of flirting styles with one type being dominant.

For the study, Hall and his colleagues had more than 5,000 participants from an online dating site answer questionnaires related to flirting style, personality and flirting experiences. The participants, whose average age was 40 and ranged from 18 to 96, rated 26 items from "strongly agree" to "strongly disagree" to reveal their flirting type.

For instance, individuals who strongly agreed with statements such as "men should pursue women, not the other way around" and "men should make the first move" are more likely than others to be traditional flirts. Playful flirts, on the other hand, would be most likely to agree with statements such as "flirting is just for fun, people don't need to be so serious" and "flirting can be harmless fun."

A polite flirt would be more likely than others to strongly agree with statements such as "people should be cautious when letting someone know they are interested" and "there are rules about how men and women should conduct themselves."

Statements such as "I am good at showing my sexual interest" and "I am good at using body language to flirt" would likely describe a physical flirt. Sincere flirts, who like to create emotional connections and communicate a genuine interest in another, tended to agree with statements like: "I really enjoy learning about another person's interests," and "making a real connection with others can be exciting."

As might be expected, women scoring high on traditional flirtation were less likely to say they approached possible mates and more likely to mistakenly think someone was flirting with them. They also had more trouble communicating their romantic interests and "getting noticed," they said.

At the other end of the spectrum, the physical flirts reported no trouble flirting with those they were interested in; they were also more likely to say others flirt with them "nearly everywhere I go," and that such come-ons were flattering. Playful flirts showed similar results. But while playful flirts indicated no trouble getting others to notice them, they did say others tended to think of them as flirtatious, even when they didn't intend it.

The polite flirt focuses on proper manners and nonsexual communication. While they reported being less likely to approach a potential partner or to find flirting flattering, they did tend to have meaningful relationships, the researchers found.

The bottom line, Hall said, is that being self-aware and know how we flirt can help us in the ever-frustrating mating game.

"Being aware of how we communicate romantic interest gives us insight about how that style may not always work out in the way we want. We might attract people who respond to our way of flirting, but not help us get the relationship we want," he said. "Because all people are a mix of styles, they should attempt to emphasize the styles that meet relationship goals more than the styles that do not. It is easier to emphasize or minimize parts of our behavior that are already there than change them completely."

To figure out what kind of flirt you are, take the quiz Hall used in the study, which is detailed in the October issue of the journal Communication Quarterly.