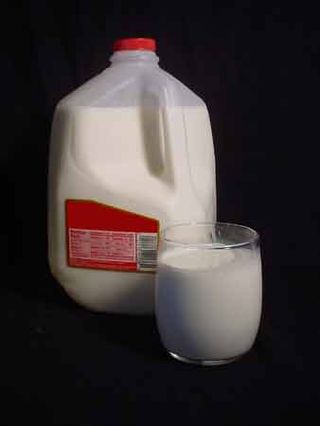 Crushing milk at high pressures could help it last for seven weeks in the refrigerator without the unfavorable flavors associated with other long-lasting milks, researchers now report.

Conventionally, milk is pasteurized, or heated at high temperatures to kill harmful germs, at roughly 160 degrees Fahrenheit for 15 seconds. While pasteurization kills most germs, it does not wipe out bacterial spores, the dormant versions of the germs, which are extremely resistant to any form of destruction. Bacterial spores and remaining germs eventually spoil conventionally pasteurized milk, which is why it typically has a shelf life of only about 20 days when refrigerated.

Heating milk to between 275 and 300 degrees for just three to five seconds can kill both bacteria and their spores, leading to milk that is stable at room temperature for up to six months. While such milk is popular in Europe and Latin America, it has strong off flavors that have so far limited its sales in the United Sales and elsewhere.

Instead, researcher J. Antonio Torres, an industrial and chemical engineer at Oregon State University in Corvallis, along with colleagues Michael Qian and Pedro Vazquez-Landaverde are now investigating squeezing milk at high pressures while using a moderate amount of heat to kill germs.

The researchers found pressurizing milk at 85,000 pounds per square inch for five minutes at about 130 degrees kills germs while retaining the taste of fresh milk. The result is milk that stays fresh at least 45 days in the refrigerator. If the researchers can make this process commercially viable, Torres anticipated such milk could appear on the market in three to five years.

Qian noted this method so far could not kill spores, however. Torres added that future research could reveal ways where heat or pressure pulses or amino acid additives could rouse the spores in milk from dormancy, and that subsequent processing could then kill the newly vulnerable spores.

The researchers will report their findings in the Nov. 29 issue of the Journal of Agricultural and Food Chemistry.