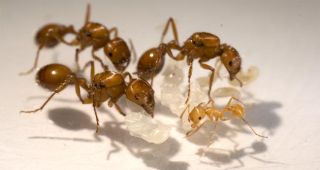 How does size affect the organization and physiology of superorganisms such as bacterial communities, insect colonies, or human cities?  James Waters and Tate Holbrook, graduate students in the School of Life Sciences at Arizona State University, work on answering this question by studying how colony size affects the patterns of behavior and energy use in ant colonies. Social insect colonies are excellent study organisms because, despite the lack of either physical connections between individuals or any kind of centralized control system, the whole colony can exhibit impressive feats of organization including the division of labor, extensive foraging networks and elaborate nest architecture. For their studies, Waters and Holbrook mainly focus on the California seed-harvester ant, Pogonomyrmex californicus. Queens of this species can be collected following the ants' annual mating flights and brought back to the lab to start new colonies. Within a month or two, eggs laid by the queens develop into larvae, pupae, and adult workers. Over the course of a year, the colonies may grow to as large as 1,000 ants in size.

One question that interested James Waters is whether colonies become more efficient as they get bigger. The first step in figuring this out was to estimate the power demands of the colonies as a function of their size. One way to think of an animal is as an engine that burns oxygen as a fuel to power all of life's processes, from locomotion to communication. Waters used a tool called respirometry to measure the amount of oxygen being consumed by entire colonies as they breathed within special chambers. While larger colonies obviously needed more energy overall compared to smaller colonies, as colonies grew they surprisingly needed less energy per ant. When groups of ants were taken out of their colonies, however, they all required the same relative amount of energy. These patterns suggest that there is something special about being in the environment of the colony that regulates energy use by individual ants, and this energy use changes, or scales, with the size of the colony.

The scaling of energy use may be associated with colony size-related changes in behavior. An important behavioral pattern in colonies of ants and other social insects is the division of labor — when different workers specialize in different jobs, like brood care and foraging. Tate Holbrook investigated how colony size influences division of labor in P. californicus. First, he carefully painted ants with unique color combinations so he could identify individual workers within each colony. He then watched colonies of different sizes for many hours, recording which ants performed which jobs. Holbrook discovered that as colony size increases, so does division of labor. In smaller colonies, individual workers perform a variety of jobs, but in larger colonies workers tend to specialize on specific jobs. It remains to be tested whether higher division of labor makes larger colonies more efficient.

The studies of Waters, Holbrook and their colleagues indicate that colonies of seed-harvester ants, and probably other social insects as well, are more than the sum of their parts. Social interactions between colony members give rise to colony-level properties that vary with colony size and shape the physiology and behavior of individuals. These results may extend to broader contexts, including the regulation of cells within organisms and the organization of individuals within societies. In fact, these studies question the very nature of what it means to be an individual. If the basic biology of a single ant is so strongly influenced by the composition of the colony in which it lives, perhaps the ant is not itself an individual so much as a part of an entity existing on a higher level of biological organization, the superorganism.