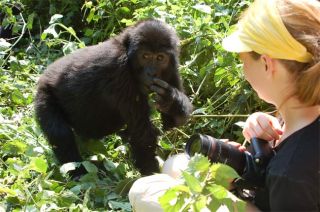 Gorillas were found to play tag with others just like humans do, trying to hit and run off without taking a hit in return. Here a wild juvenile gorilla is shown.
(Image: © Elke Zimmermann.)

Gorillas apparently can play tag much like humans do, scientists now reveal.

These hit-and-run games suggest that gorillas, like humans, will do what they can to get the upper hand.

To study play-fighting among gorillas, scientists analyzed videos of 21 of the apes from six colonies in five European zoos collected over the course of three years.

In their games, "not only did the gorillas in our study hit their playmates and then run away chased by their playmates, but they also switched their roles when hit so the chaser became the chased and vice versa," said researcher Marina Davila Ross, a behavioral biologist at the University of Portsmouth in England. "There are a lot of similarities with the children's game of tag."

During the games, the gorillas showed open-mouthed playful faces as they chased those who hit them. Hard hits resulted in chases more often than soft grabs, which were often ignored.

Instead of letting what might be a fair trade of blows happen, these hit-and-run games were shows of relatively unfair behavior, where the gorilla who starts the game tries to get away with tagging a fellow playmate without getting hit in return. Such games likely help the apes — and humans — learn how to deal with real conflict by testing what is acceptable with a safe crowd of peers and even parents, Davila Ross said.

Role-playing as chaser and the one being chased could also help apes sharpen their communication skills, according to the researchers.

The researchers said this was the first study to systematically analyze how apes respond to unequal situations in a relatively natural setting — previous studies have all been carried out in laboratories.

Still, "I don't think this is a gorilla-specific behavior — I think it's very likely present in various species," Davila Ross told LiveScience. "Chimpanzees and gibbons might also do it."

The scientists detailed their findings online July 14 in the journal Biology Letters.