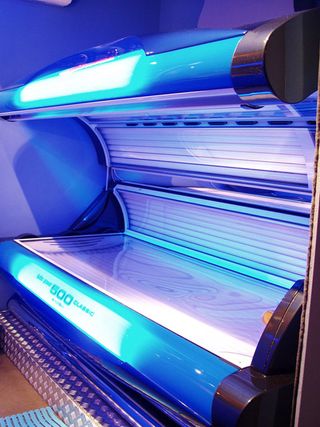 Photo taken by Patryk AKA Gruby Dolar. (a51media) There are no usage restrictions for this photo

Some people's indoor tanning habits qualify as an addiction similar to being hooked on alcohol or other addictive substances, a new study suggests.

The results show that about one-third of college students who frequent indoor tanning facilities could be considered addicted based on criteria used to diagnose substance abuse addiction. And these tan-o-holics also reported a greater use of alcohol and marijuana, and had more symptoms of anxiety than those who weren't considered hooked.

The findings back up previous indications that sunbathing, both artificial and the real thing, can be habit-forming. A small 2006 study found that those who persistently visit tanning beds can experience withdrawal symptoms if they don't get their UV-high. And a 2008 study revealed that about 18 percent of outdoor tanners qualified as addicted. (Ultraviolet, or UV, rays emitted by the sun are what cause sunburns).

The results of the current work, which is based on a larger sample and possibly more robust research methods, also suggest that reducing the risky behavior might take more than just public awareness campaigns. For some, it might require interventions more along the lines of what's used as treatment for substance abusers.

The study is published in the April issue of Archives of Dermatology, a journal of the American Medical Association.

Much evidence has tied indoor tanning with an increased risk for skin cancer, including melanoma. And last year, the International Agency for Research on Cancer warned that tanning beds are "carcinogenic to humans ," noting that those who start tanning regularly before age 30 have a 75-percent higher risk of skin cancer.

Despite these warnings, more people are tanning recreationally than in years past, particularly young adults, the researchers say.

To examine the possibility of addiction, study author Catherine Mosher, of Memorial Sloan-Kettering Cancer Center in New York, and her colleagues surveyed 421 undergraduates about their tanning habits.

The researchers modified two questionnaires used to assess substance addiction. One survey, called CAGE, consisted of four questions used for alcohol screening, such as "Do you try to cut down on the time you spend in tanning beds or booths, but find yourself still tanning?" The other included seven questions from the Diagnostic and Statistical Manual of Mental Disorders (DSM) used to diagnose substance-related disorders, such as "Have you ever missed any scheduled activity (social, occupational, or recreational activities) because you decided to use tanning beds or booths?"

About 56 percent of the participants (237 people) said they had tanned indoors, with an average of 23 visits each to tanning beds per year.

Additionally, 42 percent of the people who were considered addicted on both surveys reported that they had used two or more substances (such as tobacco or cocaine, but excluding alcohol) in the past month. Only about 17 percent of non-addicted tanners, and 16 percent of those who had never tanned reported this level of substance use.

However, since the study was only conducted on students in the Northeastern United States, the findings might not apply to the population in general.

Implications of getting hooked

The results suggest that tanning and drugs might be similar in terms of the way they get people hooked, the researchers say. Indeed, the UV-light from tanning beds has been shown to put people in a good mood, possibly because it triggers the release of pleasure-inducing chemicals in the brain, called endorphins.

If the findings are confirmed in future studies, frequent tanners might need to be treated for an underlying mood disorder to decrease their skin cancer risk, the researchers write. But more work is needed to better understand the reasons for tanning addiction, and why it's associated with addiction to other substances, they say.

The study was funded by the National Cancer Institute.